You are here: Home1 / Articles2 / California3 / The Absurdity of California’s Reparations Proposal 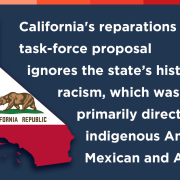 The task force estimates compensation of around $569 billion, with $223,200 per person: estimates of a national reparations total could top $14 trillion. California, which was never a slave state, although there were some instances during the Gold Rush, is a strange place to start. Given few Californians were enslaved, the expansive policy is justified by the legacy of discrimination that followed Emancipation.

This approach ignores the reality of California’s racial history. Rather than focusing on black people, who were never that numerous, the state’s racist passion was trained primarily on indigenous Americans, Mexican and Asians. Early Spanish Franciscans compared native Californians to “a species of monkey” and stripped them of their culture and traditions, forcing them to the Missions.

This was followed by expropriations and discrimination against Mexicans which led to open rebellion in the 1870s and then expulsions in the 1920s. Asian immigrants brought into work in the area were particularly badly treated, subject to racially based discrimination and bloody pogroms in both San Francisco and Los Angeles. In contrast, many black Americans considered California, for all its residual racism, a kind of promised land, certainly far better than the South. As Ralph Bunche noted, African-Americans in California were living, comparatively, “to partake in the freedom and grandeur of the Southland.”

Given this racial history, reparations for one group, based on events that started elsewhere, seems an ideal way to promote racial discord, of which we already have enough. As the recent revelations of conversations among Los Angeles City Council members demonstrate, racial harmony between Latinos, the dominant group in the state, and black citizens is less than harmonious.

LA’s Latina former City Council president, Nury Martinez, was recorded disparaging African-Americans, Jews, and Armenians in a leaked audio recording that led to her resignation. The ensuing scandal focused on racism — Martinez described a white colleague’s adopted black son as a “parece changuito” or ‘like a monkey’. The recording, which was anonymously leaked online shortly before an election, had captured a private conversation between Martinez and other powerful Latino Democrats in LA that took place in the headquarters of a powerful labour group, and centred on how to shore up their power.

Asian-Americans, already more than twice as numerous as black Americans, and whose connection to Southern slavery seems obscure at best, are upset with affirmative action policies that target their children. They have increasingly turned somewhat to the Right on this issue. In heavily Asian Orange County, affirmative action measures still lost two-to-one, and the community seems likely to support a US Supreme Court decision banning race preferences.

Most remarkable of all, California’s guilt trip comes even as state policies, what attorney Jennifer Hernandez calls “the Green Jim Crow”, have not made the lives of most African-Americans any better. In a recent study of minority success by metropolitan area, we found that black Californians had, adjusted for costs, among the lowest incomes in the country, slightly below Mississippi. Their homeownership rates are well below the national norms, and many have been leaving for more advantageous climes.