You are here: Home1 / Articles2 / Urban Affairs3 / Welcome to the New Era of Environmental Colonialism 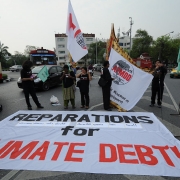 There’s a new kind of colonialism afoot in rich nations, and much like the old colonialism, this one, too, purports to be for the good of the colonized. Today’s colonialists are Left-wing environmentalists exporting their vision of “climate justice” as a way to deal with global inequality. But despite the high-minded morality implied by the latest green agenda, just like older forms of colonialism, it creates a relationship of dependency that undermines the true interests of the colonized.

Environmental colonialism was on full display at a recent guilt fest, the UN’s latest climate summit, known as the COP27. The idea cooked up by the billionaires of Silicon Valley, London and Wall Street and agreed upon at the November summit by born again zealots like President Biden, is to provide “loss and damage” funding for countries hit hard by climate disasters. In other words, we’ve just committed to paying climate reparations.

Of course, governments in these countries will take the loot, and perhaps send some of it to useful pursuits. But what the developing world needs most is not a handout but the very technologies—including fossil fuels—that have served to reduce poverty globally. What poor countries and poor people everywhere need is not green blood money but help increasing the electricity supply that is critical for industrialization.

Yet climate-conscious Western governments, corporations and non-profits are doing the opposite: In the name of “climate justice,” they are trying to restrict access to fossil fuels for the world’s poorest nations, which offers the quickest path to development; indeed, it’s a point that was raised by African leaders during the COP27 conference, who made it clear that Fossil Fuels are indispensable for uplifting millions of citizens from poverty.

“There is a lot of oil and gas companies present at COP because Africa wants to send a message that we are going to develop all of our energy resources for the benefit of our people because our issue is energy poverty,” said Namibia’s petroleum commissioner, Maggy Shino, who works within the country’s Ministry of Mines and Energy.

To many in Africa and other developing countries, attempts to block fossil fuel expansion are greeted with increasing skepticism. They see the West’s demand that developing countries eschew fossil fuels as both self-defeating and hypocritical, particularly at a time when electricity is now less available in the developing world for the first time in decades, while virtue-signaling Europeans tap out out remaining oil and gas suppliers, leaving developing countries in the lurch.

Of course, as they take the West’s reparations, leaders in developing countries will look to Russia and China and perhaps the Middle Eastern oil states for capital, energy and, sadly, political models. Thanks to self-defeating environmental extremism, a new parallel world is being built increasingly outside of Western influence.

Hügo Krüger is a South African born Structural/Nuclear Engineer, writer and YouTube podcaster, commentating on topics relating to Energy and Geopolitical Matters, Hügo is married to an Iranian born Mathematician and Artist; the couple resides in Paris.

The Absurdity of California’s Reparations Proposal
Scroll to top