You are here: Home1 / Articles2 / In the News3 / Dark Days Lie Ahead in the Dystopia of California 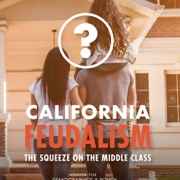 This article first appeared in The Times UK

With blackouts, crippling taxation and unaffordable housing, the Golden State is a feudal society of super-rich and serfs.

Fifty years ago, in her song California, Joni Mitchell captured the universal appeal of the eponymous state, a land of endless sunshine and golden opportunity. Contrasting her adopted home with the sheer greyness of life elsewhere, she wrote: “My heart cried out for you, California/ Oh California, I’m coming home”.

Coming home to California is not what people are crying out for these days. It may once have offered a kind of litany of platonic ideals of human happiness — opportunity, entertainment, wealth, innovation, sunshine, palm trees, movies and technology — but today, that litany would more likely be power cuts, forest fires, homelessness, crippling taxation, unaffordable housing and drought.

Up and down California this month businesses are closing early, shoppers are stocking up on non-perishable foods and smartphone users are going without their precious devices as the state’s electricity company imposes rolling power cuts to reduce the risks of forest fires.

Joel Kotkin, an academic at Chapman University who has studied urban decay and regeneration describes modern California as a reimagining of medieval feudalism. At the top are the very wealthy, the Silicon Valley entrepreneurs, investors, lawyers and entertainment types. There’s a state bureaucracy largely funded and controlled by these wealthy elites, who promote policies designed to reinforce their status….

“Independent, small business owners, a property-owning class, key to the success of democracy always and everywhere, are systematically being wiped out,” Kotkin says.

Read the rest of this article on The Times UK

Read a related report on how California’s policies are squeezing the middle class.

INVITE JOEL TO SPEAK
Stomping on the Suburbs

Giving Thanks Matters
Scroll to top