You are here: Home1 / Articles2 / Demographics3 / Giving Thanks Matters 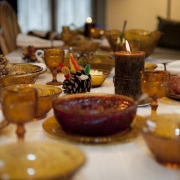 Thanksgiving may be approaching, but its chief value, that of gratitude, seems oddly out of fashion. When the Pilgrims broke bread with their Native American neighbors, it was with full appreciation of the role of Providence in their salvation.

Such a sense of appreciation is increasingly rare. Most Americans, according to a Templeton Foundation survey, feel they receive little gratitude at home or the office. The feeling of gratitude appears to drop with age. Today’s millennials are the least grateful. This is not surprising given the new generations’ low levels of interest in the very things we are likely to feel grateful for, such as family, religion or America itself.

Older people, who often have overcome hard times, are more grateful. They witnessed the triumph of liberal democracy over communism. Many of them, like me, were raised by parents who came from poverty, and instilled the notion that, for all our problems, living here, at this time, in this country, is a manifest blessing not to demeaned or ignored.

The roots of ingratitude

This loss of gratefulness, not unique to this country, is tied to the decline of critical social conventions that long held society together. The religious nature of the Thanksgiving was self-evident to the Puritans who settled New England, but it was also deeply communal, a shared experience between family, neighbors and congregants. “We must delight in each other, make others’ own, rejoice together, mourn together, labor and suffer together,” as colonial leader John Winthrop put it.

Religion, for all its undoubted spurs to divisiveness, underpinned their sense of gratitude that extended well beyond the Puritans. It later inspired even outsiders, such as Jews, Latinos and African Americans, to celebrate the New England experience. As Americans, we all embraced the notion that we were all fortunate for the blessings of home and family, even when paltry, that divinity bequeathed to us.

This connection is now being severed, particularly among the young. Religious affiliation has dropped precipitously, notes the Pew Research Center, with the fastest growth being those with no affiliation. This is particularly true among the young, where “nones” account for nearly one in three, twice the percentage among boomers. Among this demographic the non-affiliated are more numerous than all the Protestant denominations put together.

With the decline in religious observance, Thanksgiving, not surprisingly, seems to have lost its spiritual essence. It is a holiday now more identified with football and gluttony than anything of spiritual value.

The decline of family

Like religion, the institution of the family, a centerpiece of Thanksgiving, suffers a seemingly irreversible decline. Since 1960 the percentage of children raised in intact homes, notes Pew, fell from 73 percent to 61 percent in 1980 and 46 percent today. This lack of family network, as Mary Eberstadt points out in her new book “Primal Screams,” leaves children increasingly unsocialized, and less capable of establishing healthy relations on their own.

Eberstadt notes that ever-smaller families, particularly the increasing share of only children, have obliterated the wider networks that connected young people with cousins, uncles and aunts. I tell my daughters that on Thanksgiving and Passover back in New York, we used to play football games between cousins, something they may never experience.

With family and community ties weakened, Eberstadt notes, more people, again particularly the young, seek to embrace not the overall community, but an “identity” group. These are often based on grievance ideology built around sexual preference, race, gender identity or physical disability. Such identarian ideology is particularly common in our key intellectual centers such as Manhattan, where a majority of households are single. The hotbeds of identity politics — San Francisco, Los Angeles, Seattle and Boston — all have among the lowest rates of family formation in the nation.

Thanksgiving has long been part of the American story, a critical part of its identity. To be sure the sanitized versions of the first Thanksgiving almost 300 years ago were often cartoonish and ignored the suffering meted out by New England’s settlers to both Native Americans and religious dissenters. Yet it remained an uplifting part of our national story, based on the notion that all Americans had common cause to celebrate their life in this amazing country.

This loss of faith is particularly marked among the young. Nearly 40 percent of young Americans, for example, think the country lacks “a history to be proud of,” less than half the average for boomers. One-third of young Americans, according to one recent survey, have a favorable view of communism and most seem ready to jettison the market system essential to America’s evolution.

This is not surprising for a generation that has been educated under a system increasingly dominated by social justice warriors to believe that America is a hopelessly flawed country. Here the proposed California ethnic studies program, for example, takes a basically hostile approach to American history, essentially turning it into a tale of racial and other repression. This approach is increasingly the case even in the Heartland and is widely promoted by the National Education Association, the powerful teacher union.

A greater appreciation for what is

In America 51 percent of people under 30 believe that the world will be uninhabitable within 15 years. Not surprisingly, they and their Gen Z successors are also arguably the most chronically anxious generation in recent history, with high use of opioids and historically high suicide rates.

It’s the task of older generations to remind their successors that although the country and the world clearly faces great challenges, they indeed do have much to be grateful for, starting with the fact that America and the world is now enjoying the largest growth in affluence in its history. Indeed, in the face of decades of apocalyptic predictions of energy and food shortages by the green zealots, both are remarkably abundant by historical standards.

They should also realize that on many levels the environment — notably air and water — is actually cleaner than they were a half century ago, while any long-dreaded diseases have been eliminated, not only here but in many developing countries. For this, at least, they should thank visionary political leaders in both parties, our remarkable scientific and medical communities.

Our failure, as mentors and parents, has come by not countering a cultural and political culture that undermines all those things we should be grateful. We have stood back, while much of our media and schools consciously promote divisiveness and distrust as they both demonize our past and predict an apocalyptic future.

If the notion of gratitude is fading among the young, it is in part because the previous generation has done a poor job of communicating the blessings with which we have been endowed. If the Puritans, freezing in the New England fall and simply relieved not to be starving, could feel gratitude about the world, perhaps we, living in unimaginable physical comfort and freedom, should take the hint and emulate them.

Checking in On the Gulf of Mexico, America’s Third Coast
Scroll to top