You are here: Home1 / Articles2 / Politics3 / A Nation of Giants Led By Pygmies 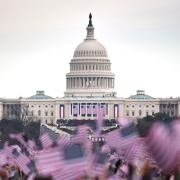 The United States today stands as a living contradiction to the ‘great man theory of history’. For the US is a great country led by small minds. In recent times, it has been ruled by a narcissistic moral reprobate and it is now being run by a cognitively deficient and scandal-plagued politician. There is a growing feeling, particularly among the young, that today’s America is diminished. Yet the US remains the world’s premier power, and its last best hope against a rising authoritarian tide.

So, how does an America led by mediocrities succeed? The secret sauce lies in two great assets – America’s geography and its constitution.

America enjoys an enormous expanse of arable land, the largest in the world, bigger than that of Russia and Ukraine combined, and nearly 100million acres more than China. It is not only by far the largest food exporter in the world, but it also leads all countries, including Russia and Saudi Arabia, in the production of fossil fuels, which are now being consumed more than ever. And not to be overlooked are America’s vast reserves of fresh water, the third largest on the planet.

These assets separate America from its largest rivals. Neither China nor Europe has adequate domestic energy supplies, making both ever reliant, like Tennessee Williams’ Blanche DuBois, on the ‘kindness of strangers’. Shortages and high prices are already hammering Germany’s industrial economy, from its dynamic mid-sized firms to the giants of its chemicals industry, despite the German government spending a massive half-a-trillion dollars on energy subsidies. Europe is now desperately firing up coal plants and reconsidering nuclear energy, but in the near-term its energy salvation will most likely lie in the oil fields of the Permian basin and other hotbeds of US energy production.

These geographic advantages, as well as the growing global suspicion about China, are turning America once again into the world’s primary destination for foreign investment, particularly in energy-intensive sectors like manufacturing. Japan, Germany and Canada are the top investors. German car giant Volkswagen sees the US as its best bet for ‘strategic growth’, especially given the business and political pressure against investment in China.

Yet perhaps even more than nature’s gifts, America’s greatest asset may lie in its centuries-old constitutional order. This is very different to the much ballyhooed, bureaucratic ‘rules-based’ system so attractive to Eurocrats and their American admirers. In Europe, decisions are based on the political fashions of the moment. Only a bureaucracy in thrall to green ideology, for instance, could have ignored all the warning signs of the current energy crisis and placed ever more bets on unreliable wind and solar in the name of stopping climate change – even while China, by far the world’s biggest emitter of CO2, is building more coal plants to power its homes and industries. Today, coal is now being consumed more than at any time in history.

Although it looks less ‘professional’ than the Brussels bureaucracy, the US’s constitutionally directed democratic governance has survived other chaotic periods like this one. As bad as our leaders may be, they are fortunately not omnipotent. In contrast, while unencumbered leaders can at times make enormous strides in catching up with more advanced countries, they almost always fail in the long run – bad news for Xi and Putin.

These lessons have still not been learned in academia and the media, which continue the old Western intellectual habit, visible in the 1930s and again in the 1960s, of eulogising foreign despotisms. For years now, many have regarded the ascendency of China’s ‘stronger government’ model as inevitable. Yet now, even China’s supreme leader admits its growth will be slowing and that surpassing the US in the medium term is no longer assured.

Americans may have been divided by Covid. But a single national response – effective or not – was always going to be difficult in a country where power is separated by the constitution between the White House, elected representatives and judges who are approved by congress. In the US, after his claims that the 2020 election was stolen, Donald Trump was stopped not by his political opponents, but by his own allies – including vice-president Mike Pence, attorney general William Barr and many of his own judicial employees.

INVITE JOEL TO SPEAK
Can Capitalism Save Hollywood?

The Future of Cities
Scroll to top