You are here: Home1 / Articles2 / The Economy3 / Can Capitalism Save Hollywood? 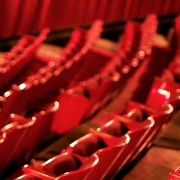 After a decade of rapid growth, the nation’s media and entertainment complex is facing retrenchment and, perhaps, a necessary reappraisal. Firms are consolidating. Workers are being laid off at Disney, Warner Brothers, Paramount, CBS, and other production houses. News media firms like CNN, Gannet, and Buzzfeed are planning similar actions. In 2022, stocks in media companies lost $500 billion in value, and stocks in tech firms, increasingly big players in entertainment and news, suffered a reversal of an astounding $4 trillion.

This decline reflects the growing gap between the legacy media and at least half their potential audience. According to Gallup, overall public trust in the media is lower than it’s ever been; barely one-third of poll respondents express confidence, half the percentage that felt that way in 1978. Hollywood, television, and radio register similarly low levels of support.

Meantime, much of the established media see their primary mission not as informing or entertaining but propagating ideologies. Yet this shift, executives know, is not sustainable according to the most critical metric—profits. “I think in the end no one much cares about politics but they do care about money,” one well-placed executive suggests. “People know that sex and violence sell better than political lectures. In the end, if you want to send a message, use Western Union.”

Hollywood and the American news media have been traditionally profit-hungry and market-oriented. Entertainment, in particular, started as primarily an outsider’s industry, forged largely by Jewish immigrants who had worked previously as upholsterers, butchers, furriers, and clothing merchants. Though nepotism kicked in early, many of the early stars were hardly theater aristocracy; early on, many were actually cowboys. The moguls, of course, were rarely on horseback, but they succeeded, as Neil Gabler notes, because they “marketed movies like clothing.”

By contrast, the European film industry has long been dominated by state enterprises and funding. It was seen as a national asset—a way of asserting cultural independence from what the French, for example, saw as cultural colonization from Hollywood. A similar pattern emerged in news media. But while the BBC may have been the most respected name in news, it was U.S. companies—all founded by entrepreneurs like CBS’s William Paley, RCA’s David Sarnoff, and CNN’s Ted Turner—that became the most influential global sources of information. In historic terms, the Russian, Chinese, and European news services never had a chance against their opportunistic American competitors determined to monetize audiences.

But even in the U.S., today’s news and entertainment business shows unmistakable signs of internal decay. The vast overproduction of arts majors has flooded the market and made access to jobs more dependent on personal connections. Costing an average of $100,000 each, MFAs may be overwhelmingly left-wing, but they are also poorly compensated, with salaries paying on average just $67,000 annually. This creeping credentialism presents a powerful barrier to working-class entrants, notes the Guardian. Today, unabashed “nepo babies” increasingly dominate, while opportunities shrink for those lacking the proper bloodlines or expensive credentials.

There’s long been concern that obsession with profit might lower cultural standards. Yet one could argue that U.S. media had its heyday back when culture was a competitive, capitalist industry. In mid-twentieth-century America, a literate culture was widely shared between the arbiters of taste and the middle class. Average Americans in the 1950s purchased large numbers of classical works and books by contemporary authors such as Ruth Benedict and Saul Bellow, as historian Fred Siegel has observed. Many enjoyed watching Shakespeare plays on television; one such program attracted a remarkable 50 million viewers.

In Hollywood, great films tended often to be popular ones as well. Critics praised, and moviegoers flocked to, films such as West Side Story, The Sound of Music, or even ones as recent as The Lord of the Rings trilogy. By contrast, today’s award-winning films seem largely chosen for their appeal to insiders and reflect ignorance of or contempt for much of their potential audience. Indeed, many movies considered Oscar material today have gross sales worth less than the cost of a “modest” Beverly Hills mansion.

A Nation of Giants Led By Pygmies
Scroll to top