You are here: Home1 / Articles2 / California3 / Triumph of the Woke Oligarchs 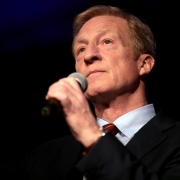 Like the rest of the country, although far less than New York, California is suffering through the Covid-19 crisis. But in California, the pandemic seems likely to give the state’s political and corporate elites a new license to increase their dominion while continuing to keep the middle and working classes down.

Perhaps nothing spells the triumph of California’s progressive oligarchy more than Governor Gavin Newsom’s decision to off-load the state’s recovery strategy to a task force co-chaired by hedge-fund billionaire Tom Steyer. A recently failed presidential candidate, Steyer stands as a progressive funder. He is as zealous as he is rich. Steyer sometimes even found the policies adopted by climate-obsessed former governor Jerry Brown not extreme enough for his tastes.

Some conservatives wistfully hope that the pandemic will push the climate crusaders to the side. In California, at least, the corporate aristocrats, the governmental apparat, and the progressive nonprofits have  the momentum to impose their ultra-green vision on the state’s residents. Steyer may have made much of his fortune on fossil fuels, including coal, but now, approvingly described as “a reverent Christian,” the Bay Area mogul seems to be eager to repent, both through his political largesse and as operator of a fulsomely organic ranch down the coast from his San Francisco manse.

What Kind of Recovery Will the Oligarchy Allow?

Steyer’s failed, self-funded presidential run was full of extreme notions, such as imposing a “state of emergency” to address climate issues, essentially shutting down fossil fuels; and, as a kind of bonus for those who still can find work, promoting a $22 an hour minimum wage while offering alms for the soon-to-be-eliminated legions of miners and energy workers.

If this is what he wants for the recovery, Steyer will simply accelerate the state’s already poor performance in creating higher-wage middle- and working-class jobs outside those created or subsidized by government. Over the past decade, according to Chapman University’s Marshall Toplansky, the vast majority of jobs being produced in California pay under the median wage, and 40% pay under $40,000 a year. Since 2008, the state has created five times as many low-wage jobs as high-wage jobs.

California’s climate regulatory regime, notes relocation expert Joe Vranich, has been particularly hard on manufacturing. Over the past decade, according to BLS data, California has fallen into the bottom half of states in manufacturing-sector employment growth, ranking 44th last year; its industrial new job creation has been negative, compared with gains from competitors such as Nevada, Kentucky, Michigan, and Florida. Even without adjusting for costs, no California metro ranks in the US top ten in terms of well-paying blue-collar jobs; but four metro areas—Ventura, Los Angeles, San Jose, and San Diego—sit among the bottom ten.

Perhaps nowhere will the pain be worse than in Bakersfield, capital of California’s once-vibrant oil industry. That industry is now slated for extinction by policymakers, even as the state has emerged as the largest US importer of energy and oil, much of it from Saudi Arabia. This ultimate effort at “virtue signaling” will cost California as many as 300,000 generally high-paying jobs, roughly half held by minorities, and will particularly devastate the San Joaquin Valley, where 40,000 jobs depend on the industry. “Imagine that the state dictated that the entertainment industry be eliminated from Los Angeles, or the tech industry be eliminated from Silicon Valley. That is what removing the oil and agriculture industries from Bakersfield is like. “It is an existential threat to the entire area,” says Rob Ball of the Kern County Council of Governments.

Read the rest of this piece at RealClearEnergy.org.

The Coronavirus Means You May Have Seen Your Last Skyscraper, New York
Scroll to top