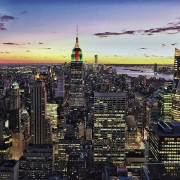 America’s great cities are coming back, albeit slowly, from the shock of the pandemic, and its divisive aftermath. But don’t expect them to fully recover their former status any time soon.

Amid the rise of on-line work, along with increased violent crime discouraging people from returning to the trains, and a fear of pestilence, the populations of downtowns in particular have dropped dramatically over the past two years—accelerating a longer-term trend in which large metropolitan areas have had a net loss of domestic migrants to smaller cities since 2015. As of 2022, the big cities are losing domestic migrants to more rural areas as well.

As anyone walking in the largest downtowns can clearly see, the mass return to the office—the key function of traditional downtowns— has been much slower than expected, particularly in San Francisco, Chicago and, crucially, New York, where fewer than 10 percent of office workers are back five days a week and fewer than 40 percent are back even one day a week.

Some city boosters continue to see this as a temporary phenomenon. But as mayors, governors and even President Biden urge a return to the office, their ineffective hectoring is making it clear that the remote working genie is already out of the bottle.

San Francisco companies, according to a Bay Area Council survey, expect employees to come to the office three days a week or less, with barely one in five seeing a return to “normal.” Similarly a survey by the Partnership for New York showed that roughly three in four Manhattan offices will allow either a hybrid model that requires two to three days at the office or no office days at all. All this is happening at a time when many landlords are offering freebies, like paying for moving costs and retrofitting spaces.