You are here: Home1 / Articles2 / Demographics3 / There Are Dark Days Ahead for the Jewish Diaspora 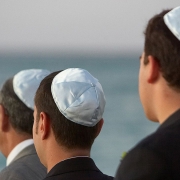 Jews around the world, particularly outside the fortress of Israel, are threatened in a way not seen since the 1940s. A fundamentally unstable world, with rising class and racial animus, creates a perilous environment for history’s favourite target, as seen previously in such periods as the fall of Rome, the Crusades, the Black Death and the Great Depression of the 1930s.

Faced with rising anti-Semitism, Jews lack a leadership that is focused squarely on this challenge. Instead, the bulk of the community leadership concentrates largely on attacks from the right – on the shadowy white nationalists who, however small their numbers, most closely resemble the worst anti-Semites of the past, and who sometimes even use Nazi symbolism for inspiration.

Yet as noxious as the far right is, it is a fairly marginal force in places like the US. There are far-right brutes with guns, so the right can be lethal when stirred. But compared with the anti-Semitism of the ‘progressive’ left, the far right’s anti-Semitic agenda has little influence on Congress, academia or the mainstream media. Indeed, in the media, anti-Jewish hate crimes are consistently underreported, even though crimes against Jews are the highest per capita among any minority group. To the legacy media, these anti-Semitic crimes – unless they are committed by white nationalists – are simply less important than those against Muslims, Hispanics and African Americans.

To be sure, Jews still have reasons to fear the far right, which has long been infected by anti-Semitism. This threat has been exacerbated by the polarisation of US politics, which has pushed many more people to the extremes than usual, and by the popularity of conspiracy theories among ultra-conservatives. The serially disgraced Trump’s growing reliance on truly reactionary political movements has enhanced the far right’s position far beyond its actual numbers.

Indeed, some Republican Party spokespeople adopt tones that should make many Jews uncomfortable. Rightist media star and Trump ally Candace Owens, for example, once stated that Hitler would have been ‘fine’ if confined to Germany. Trump-backed gubernatorial candidates, likely losers in both Illinois and Pennsylvania, have also made statements that would make most Jews cringe. The fact that neo-Nazis have turned up outside right-wing meetings, like the Turning Point USA conference this summer in Florida, is a source of total embarrassment for the right – even though Turning Point denounced the Nazis and wanted nothing to do with them.

In at least one case, during last year’s gubernatorial race in Virginia, Democrats sent fake white supremacists to Republican campaign rallies in order to embarrass the GOP. But some Trumpians don’t need to be fooled in order to embrace extremist memes. Pennsylvania gubernatorial candidate Don Mastriano, for example, has embraced far-right activists who claim he will lead Pennsylvania into ‘the glory of God’. Trump may have Jewish grandchildren and only a short, opportunistic affinity to the cultural right, but last week Trump loyalists hurled hateful and anti-Semitic rhetoric at the judge who approved the search warrant for the raid on Trump’s Mar-a-Lago home.

Homepage photo: D. Berkowitz via Wikimedia under under CC 2.0 License.

INVITE JOEL TO SPEAK
Step Aside NASA, Elon Musk Is In Charge Now