You are here: Home1 / Articles2 / The Economy3 / The Reshoring Imperative 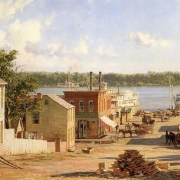 The COVID-19 pandemic brought tragedy and disruption to America. But it has also provided another stark warning concern­ing the country’s disastrous over reliance on overseas production. It has demon­strated that without a strong, self-reliant industrial base, this country’s ability to forge a healthy, prosperous future—and even its ability to defend itself against foreign enemies—will be severely compromised.

The fact that the world’s largest, and theoretically most advanced, economy could not provide basic medical equipment like masks or the basic components of pharmaceuticals came as a shock, particularly as the country was forced to lean on its leading geopolitical rival, China, to address a health emergency that originated there. These developments have stirred some businesses and politicians in both parties to seek ways to encourage domestic production.

Unfortunately, the response could prove too little and too late. Offshoring is not fundamentally a supply-side problem, as some sug­gest, caused by a lack of skilled workers or technical expertise in the United States, but stems from the insatiable demand of U.S. firms for cheap, non-union, and (if possible) politically unfree labor. Firms engage in offshoring to avoid paying American citizen-workers and sometimes, even at home, exploit short-term foreign workforces lacking in politi­cal, civil, and labor rights.

Rather than simply rehearsing the common boilerplate of “fixes” now being discussed, however necessary, reviving America’s industrial base will require the stronger medicine of a comprehensive national industrial policy. These tools include support for skills training and tax incentives, but would extend to policies like government procurement, local content requirements, tariffs, and quotas to compel firms to local­ize production in the United States, using American workers, and—if necessary—using the power of the government to mandate strategic production.

The pandemic demonstrated in the starkest possible way the vulnerabilities brought about by deindustrialization. Camille Farhat, a for­mer top executive at General Electric, Baxter, and Medtronic, and now CEO of Michigan-based manufacturer RTI Surgical, argues that many critical medical products can be produced domestically. “Any­thing in this space is not too difficult to bring back,” the Beirut native suggests. “It’s often a product not of skill and labor but taxation that drives companies else­where. We have to ask ourselves sometimes is America for America?”

Farhat hopes the pandemic will convince other business leaders to stop “destroying the supply ecosystem” that makes production possi­ble. “To stay safe, you have to do contingency planning—you have to restore the network and maintain surplus production capacity. Hope­fully, we are learning that lesson.” The undermining of what has been described as “the industrial commons,” which encompasses not just production, but research and development, supply chains, embedded process development, and engineering capacity, is now widely recog­nized as a critical problem.

This extends well beyond medical equipment. This year auto pro­duction was curtailed due to a shortage of semiconductors tied to a drought in Taiwan. America’s push into renewable energy runs head-on into China’s dominance of solar panels and the essential metals needed to produce “clean” electricity and electric cars. And in technology, U.S. companies, even under Trump, increasingly look to places like India, the Baltic states, and the Philippines for high-tech support, and increasingly design as well.

The most critical loss has been in manufacturing. Between 2000 and 2007 alone, the United States hemorrhaged 3.4 million jobs, about 20 percent of the sector’s total. It lost a further 1.5 million manufacturing jobs between 2007 and 2016. These rapid losses were unique in American history, and without parallel in other major Western coun­tries. Throughout the period between 2004 and 2017, the U.S. share of world manufacturing shrank from 15 to 10 percent, while our reliance on Chinese inputs doubled, even as our dependence on Japan and Germany shrank. The trade deficit with China, according to the Eco­nomic Policy Institute, cost as many as 3.7 million jobs since 2000.

This deficit now extends even to high-tech products, which sank from a surplus of $32 billion in 1997 to a deficit of $200 billion in the twelve months through February 2021 (in constant 2000 dollars). Innovation remains, but often merely lags production in being off­shored. When companies move production abroad, they often follow up by shifting research and development there as well. Remarkably, this has also included sources of critical components for military goods, many of which are now produced in hostile countries like China.

These shifts of production overseas may boost temporary profits but have proved a disaster for many communities, and ultimately many companies. Between 2000 and 2015, the death rate increased for middle-aged white Americans with a low educational level. Anne Case and Angus Deaton say this trend is attributable primarily to “deaths of despair”: suicides as well as deaths related to alcohol and drugs, includ­ing opioids, that are par­ticularly concentrated in deindustrialized communities. John Russo and Sherry Linkon have described how the impact of deindustrialization on communities like Youngstown, Ohio, an old steelmaking center, undermines the sense of worth and optimism among residents, many of whom can recall better days:

In places like Youngstown, many people still remember what life was like when employment was high, jobs paid well, workers were protected by strong unions, and industrial labor provided a source of pride—not only because it produced tangi­ble goods but also because it was recognized as challenging, dangerous, and important. The memory of what it felt like to transform raw ore into steel pipes and to be part of the connect­ed, prosperous community that work generated still haunts the children and grandchildren of those workers. They long for the sense of pur­pose that industrial labor brought, even as they stock shelves at Walmart, wait tables at Applebee’s, and try to persuade strangers to make donations from a cubicle at the local call center.

Michael Lind is a professor at the Lyndon B. Johnson School of Public Affairs at the University of Texas–Austin, a columnist for Tablet, and a fellow at New America.