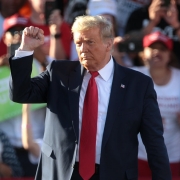 We cannot hope to have a functional democracy when property and information are controlled by a small number of companies tightly allied with political power.

For four years America has shuddered watching Donald Trump, the poor man’s Benito Mussolini, doing his Il Duce imitation. Certainly, Trump’s timely political demise should be celebrated, but we cannot ignore a far bigger long-term threat to democracy—one that may be further accelerated by the new regime in Washington.

Under the kindly eyes of Uncle Joe, we soon may find ourselves living under an updated version of the fascist “corporate state”— an alliance between political leaders and a handful of ultra-rich, ultra-powerful companies that increasingly dominate the economy and culture. This new American-style corporate state reflects not a conspiracy but the politics of a society with unprecedented concentrations of wealth and power.

These firms, based largely in the tech industry, have benefited massively from the lockdowns and now account for nearly 40 percent of the value of the Standard and Poor index, a level of concentration unprecedented in modern history, As the giants get even more gigantic, up to 30 percent of America’s small businesses face bankruptcy and the ranks of the poor have grown by 8 million.

The original fascist corporate state developed in Italy protected private property but also sought to use the private sector to support the political ends of the state. We are seeing that broad pattern now with the rise, particularly in the aftermath of George Floyd’s killing, of what is heralded as “stakeholder capitalism,” where private companies, rather than simply seeking out profit, genuflect to the left’s social agenda on issues of race, gender and green virtue.

To be sure, the values American corporations appear to be advancing now are very different than those in Italy nearly a century ago. But the linkage between private and political power, accelerated by Trump’s toxicity, is similar. Biden raised record sums from the corporate elite, notably the tech oligarchs and their Wall Street allies. Among financial firms, communications companies and lawyers, Biden outraised Trump by 5-to-1 or more. Besides providing money, the tech giants actively helped direct Biden’s campaign and volunteered their digital savvy, with Mark Zuckerberg himself financing election day operations in many critical states, something sure to titillate the tinfoil-hat wing of the GOP.

Like many Americans, tech moguls and elite financiers rightly despised Trump’s crudity and nativist memes, but they were more immediately motivated by self-interest—starting with their need to maintain a pipeline of immigrant workers to collusively keep their labor costs down and to keep maintain trade and commerce with China. Biden also had the virtue of being able to stop real progressives, like Bernie Sanders and Elizabeth Warren, who openly challenged oligarchal power.

Why Trump’s America Will Live On
Scroll to top