You are here: Home1 / Articles2 / Politics3 / How Race Politics Burns Out

No future awaits those who rage against family, work, and community.

Racial identity politics has become the rage in the media, entertainment, and political worlds. You cannot read a mainstream publication, attend a sporting event, or browse a new educational curriculum without running a gauntlet of admonitions about America’s “systemic” racism and how it must be addressed, including through violence.

Millionaire athletes, anchors, non-profits, and corporate executives genuflect to groups like Black Lives Matter, an organization with openly radical, neo-Marxist aims. Yet amidst all this, very little attention has focused on what actually works for minorities who have faced harsh treatment in the past. By focusing largely on white guilt, suggests Rolling Stone’s Matt Taibbi, movements like BLM embrace a form of “egghead racialism” that sees salvation as part of an effort to “strive to be less white,” as if their very pigmentation is a mark of inherent evil.

No doubt this agenda is working profitably for some, such as writers and administrators in the diversity “industry” and even some black fashion designers. But rhetorical genuflecting and quotas for board seats does little to improve the conditions on the ground for the vast majority of historically disadvantaged groups like African-Americans. As John McWhorter pointed out in the Atlantic, the idea that black progress relies largely on addressing white sinfulness seems an extreme form of “dehumanizing condescension” that robs Blacks, and other minorities, of any agency outside protest or destruction and does little to address the underlying causes of despair.

What works? A historical perspective

In today’s “woke” politics, some may insist I (a white male in his sixties) have no business even addressing these issues. Yet it seems far more useful, if we are serious about addressing racial disparities, to look at what has worked in the past—for both African-Americans and other groups—to transcend discrimination and create a durable success in a diverse society.

In doing research for my 1992 book Tribes, I found ethnic success was less about gaining unquestioning compliance on cultural and political matters from the majority than in encouraging behaviors, such as frugality, hard work and mutual support. This latter approach has propelled virtually every successful dispersed ethnic group, from the Jews and British to the Chinese, Indians, Palestinians, Lebanese, and West Indians. As the great Arab historian Ibn Khaldun noted, “Only tribes held together by a group feeling can survive in the desert.”

This notion of a mutual assistance is more important than attempts to “reprogram” whites into “anti-racism” as defined by the woke. Discriminated-against minorities have succeeded, first and foremost, by developing their own skills and economic power, building alternative institutions and strengthening family ties.

In this country, Irish, Italians, Jews, and Asians, among others, were long barred from certain jobs and many neighborhoods. Rather than wait for the majority to discover tolerance, they labored in niche economies—fish mongering and construction among Italians, gardening and farming among Japanese, retail ownership for Koreans and the garment trade for the Jews. Among Asians, the first generation’s struggles allowed their children to make remarkable progress by stressing education and, when needed, political action. These groups have done, for the most part, better than whites. Asians, for example, constitute 74 percent of all Stuyvesant, a prestigious New York City academic high school, students.

African-Americans once widely embraced this approach. In the first half century after slavery many leaders, from pragmatists like Booker T. Washington to nationalists like Marcus Garvey, stressed both personal responsibility and social cohesion. Even Garvey, the father of black nationalism, modeled his program partly on Jewish success.

At its very essence, it seems absurd to base a group’s ascent on winning over people assumed to be congenitally racist at heart. Indeed much of the strongest progress among African-Americans took place in the 1950s and 1960s, when discrimination was far more rampant but black business communities, families, and church institutions were not just intact but cohesive and strong. The Blacks who built successful businesses in the first half of the last century, notes historian John Sibley Butler, nurtured a culture of “self-help”—in part due to their exclusion from mainstream business—that brought economic rewards, helping build powerful religious and educational institutions critical to the nascent Civil Rights Movement. 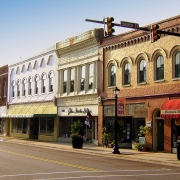 The Twilight of Great American Cities is Here. Can We Stop It?
Scroll to top