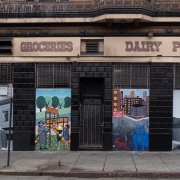 Nowhere is better suited for flights of fancy than California, a place of miraculous growth and remarkable innovation. A backwater barely a century ago, with just over 3 million residents compared to nearly 40 million today, the Golden State has established pre-eminence over everything from agriculture and film to space travel and the internet.

Yet in recent years, California’s lead has become increasingly concentrated in one sector: tech. This has left the state deeply exposed to the recent decline of the stock market, which is concentrated heavily in tech stocks, and the inhospitable short-term climate for start-ups, which once reliably filled the state’s coffers. Easy Street is about to get a lot less so.

Even as state offices and their media megaphones crow about its nearly $100 billion surplus, California’s Legislative Analyst’s Office predicts the likely reappearance of budget deficits in the near future. Instead of flush times, we are likely to see a repeat of the last recession, which ended in 2009. Back then, it took California five years to get revenue back up to pre-downturn levels, during which time the government was forced to cut state programmes by roughly $45 billion to compensate for the deficit.

In many ways, California is even more vulnerable today. Governor Newsom and his PR team may boast about the state’s economy “roaring back”, but California enters the recessionary environment with the nation’s fourth highest unemployment rate and one of the nation’s slowest job recoveries. Los Angeles and San Francisco, its two biggest cities, are near the bottom of all metros in terms of job recovery.

This decline has its roots in the pre-pandemic era. For years California has been severely underperforming its main rivals — Texas, Washington, Arizona and Utah — in construction, manufacturing and professional and business services. Over the past decade, roughly 80% of all jobs created in California paid below the median income, creating an ever-expanding working class in low-end service industries.

During the boom for the rich, the state decided not to re-diversify its grassroots economy but expand its welfare state. This may have won plaudits from progressive publications, but the state is not a bottomless pit. California still suffers the highest long-term debt of any state — $507 billion — and that will only increase with interest rates.

And yet there seems little appetite to change course. Flush from his recall triumph, Newsom, along with the legislature, is determined to double down on his attempt to fashion California as the model for the progressive future. Others, such as the University of California’s Laura Tyson and former Newsom adviser Lenny Mendonca, see the Golden State as creating “the way forward” for a more enlightened “market capitalism”. But this reality is hard to see on the ground.