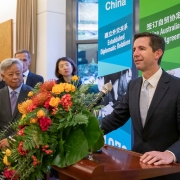 Australia continues to benefit from China’s rise, though few countries are more threatened by its expanding power. Once closely tied to the British Commonwealth, and later to the United States, the Australian subcontinent, with only 24 million people, now relies on China for one-third of its trade—more than with Japan and the U.S. combined. Australia’s major economic sectors rely on Chinese support; investors poured in $17.4 billion in 2017.

Australians increasingly understand the implicit danger of this dependency. Unlike the U.S., which possesses the market size, military capacity, and technological power to resist Chinese expansionism, Australia is far more vulnerable to the Communist regime’s efforts to shape its economy, cities, and political system. Australians aren’t as threatened as Hong Kong’s democracy activists, but China’s influence has intensified. China has refused visas to two critical Liberal MPs in Australia, for example, unless they “repent and redress their mistakes”; scholars, meantime, have faced considerable pressure to toe the party line.

China’s defenders insist that criticism of the Middle Kingdom reflects deep-seated racial animosity, and Australia has a history of overt discrimination. In the late nineteenth century, large numbers of Chinese arrived in Australia to work in the gold mines, and their presence was resented. Through the late 1960s, a “white Australia” program, protecting against “Asian invaders,” was the foundation of immigration policy, its effects lingering long after it was formally discontinued. Despite the hostility, many Chinese stayed in Australia, though they remained a small, isolated community outside the mainstream, predominantly white society.

Australia long sought to maintain its distinctly British character. Before World War II, the country discriminated against Asian immigrants but also against those from eastern and southern Europe. A low birth rate and consistent postwar labor shortages ultimately forced Australia to open itself up to newcomers. Following the war in Vietnam, where Australians fought alongside Americans, the country permitted entry of 80,000 Vietnamese; today, the nation’s Vietnamese community surpasses 200,000 people. As the country abandoned its restrictionist policy, other Asians, along with Middle Easterners, arrived en masse. Last year, for the first time, Chinese immigrants outnumbered British arrivals. Today, roughly 500,000 Chinese-born people make their homes in Australia, with about 300,000 having arrived after 1980.

To a large extent, Asian immigration redefined Australia’s identity, giving hope that the country, as former prime minister Paul Keating remarked in 1992, would no longer be dragged down by “Anglophilia and torpor.” Australia’s demographic transformation was paralleled by an economic one, shifting the country toward engagement with Asia.  In short, Australia, which hasn’t experienced a recession for almost 30 years, found a comfortable niche supplying commodities like natural gas, iron, and coal to China, which leads the globe in raw material consumption. But this is a mixed blessing, since Australia now follows a classic mercantilist pattern of resource dependence on the “imperial” seat. As a result, according to a recent Australian Parliament study, Australia now imports Chinese-made manufactured goods, once produced “down under.”

Many Australians have expressed concern that the country’s intense integration with an authoritarian superpower presages a new life as a “vassal” state. Unlike the British or Roman Empires, though, China’s imperium isn’t focused on territorial expansion outside its home areas. Instead, it cultivated vassal states that pay tribute to Beijing with products and fealty. And so, industries like tourism are now highly dependent on China, with one in four tourist dollars coming from the Chinese—equal to the combined expenditures by Americans, Japanese, British, and New Zealander visitors. It’s no surprise, then, that many Australian hotels now use Chinese as a second language.

Read the rest of this article at City Journal.