You are here: Home1 / Articles2 / Demographics3 / Education Wars: The New Battle For Brains 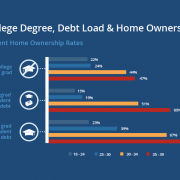 The end of stimulus — as well as the power shift in Congress — will have a profound effect on which regions and states can position themselves for the longer-term recovery. Nowhere will this be more critical than in the battle for brains.

In the past, and the present, places have competed for smart, high-skilled newcomers by building impressive physical infrastructure and offering incentives and inducements for companies or individuals. But the battle for the brains — and for long-term growth — is increasingly tied to whether a state can maintain or expand its state-supported higher education. This is particularly critical given the growing student debt crisis, which may make public institutions even more attractive to top students.

The great role model for higher-education-driven growth has been California. The Golden State’s master plan for education — developed under Pat Brown in 1960 — created an elaborate multi-tiered public system that offered students a low-cost and generally high-quality alternative education. Over the next half century, California became, in historian Kevin Starr’s phrase, a “utopia for higher education,” as well as a model for other states and much of the world.

Today many of the states that copied California’s model — notably North Carolina, Texas and Virginia- — threaten to upend the Golden State’s dominance of public higher education. These states now all spend far more than traditional leader California when you look at percentage of state expenditures; Virginia, for example, spends twice as much of its state budget on higher ed than California does. New York and Illinois spend an even a smaller percentage.

The combination of fiscal woes and misplaced priorities has engendered spending cuts in California. Tuitions for higher public education have soared: In 2009 they were raised 30%, and they have been raised over 100% over the past decade.

To be sure, the University of California (disclaimer: I attended the Berkeley campus) retains a huge reservoir of talent, with courses taught by 111 Nobel Laureates. It still dominates lists of top public universities;  six of the top 14 schools in the US News and World Report 2010 rankings are UC schools.  But the signs of relative decline are clear. In 2004, for example, the London-based Times Higher Education ranked UC Berkeley the second leading research university in the world, just behind Harvard; in 2009, that ranking, due largely to an expanding student-to-faculty ratio, had tumbled to 39th place.

Other states are now looking to knock California further off its perch. In 2009 alone the University of Texas lured three senior faculty members from UC. As departments shrink at places like Berkeley, those in schools such as the University of Texas at Austin, Texas A&M and Texas Tech have expanded rapidly, adding students and buildings.

Of course, these schools also have budget problems, and they have increased tuition too–albeit at a significantly lower rate. But for the most part, these up-and-coming state systems are more focused on expansion than on retrenching and survival. While some in California question the viability of some of the newer UC campuses, Texas is busily expanding its roster of tier-one, public research universities, seeking to add the University of Houston as well as UT campuses in north Texas, Arlington, Dallas, El Paso and San Antonio to the ranks of UT Austin, Texas A&M and Rice, a private school in Houston.

Texas Tech,  best known for its engineering and agriculture-oriented programs, for example, is thriving. Located on the windy Great Plains on the western side of the state, it is far from the state’s major metropolitan areas, and its home town of Lubbock (population: 225,000) is likely not high on anyone’s list of hip and cool college towns. Yet the school, which enjoys strong alumni and business support, is in the midst of a major building boom and a $1 billion capital campaign. When I visited there earlier this month, the campus was full of construction crews; Texas Tech has added over 3000 students in the past two years and now has over 31,000 students.

Other unlikely upstarts include the University of North Dakota, which has boosted spending by 18.5% in 2009, a luxury afforded by the state’s booming energy, agriculture and increasingly high-tech economy. North Dakota, which historically has suffered significant loss of young talent, has set a goal to rank No. 1 in the average education of its population. Today it already ranks No. 3 in terms of college-educated residents between the ages of 25 and 34.

These shifts could presage — and to some degree enhance — what is already a powerful trend toward states that, in the past, have been educational also-rans. Although Texas also faces budgetary constraints, its annualized $9 billion deficit is dwarfed by those of California, Illinois and New York. And those bluish states already have much higher tax rates, which leave less room for revenue increases. Texas also has the luxury of an $8.2 billion “rainy day” fund, as well as a more vibrant economy.

More important still, states like North Carolina, Virginia and Texas continue to grow more rapidly than the older brain-center states. This is particularly true in terms of the high-tech jobs many graduates would likely seek.  Indeed since 2002 these states have all enjoyed far greater growth rates in high-tech employment than California, Illinois, Michigan or New York. They also have added more new tech jobs in actual numbers than California–despite their significantly smaller size.

Migration patterns are also changing among college-educated workers. Between 2005 and 2007, Texas, Virginia and North Carolina already enjoy higher rates per capita of net migration of educated workers between the ages of 22 and 39 than California, New York or Massachusetts.

This advantage could expand as the upcoming states increase their educational offerings along with employment opportunities. Students may end up tempted to attend schools closer to where there is job growth. Unlike Austin and Raleigh-Durham, which have rapidly expanded tech employment, Silicon Valley has produced virtually no new net tech jobs for the past decade.

The second impact may  be more subtle, as declining revenues from businesses and individuals reduces the opportunity to boost education spending. As the country stumbles into this recovery, the greatest advantage will fall not only to states with the most natural resources, but those with the best-educated human resources. For a half century this is a game that states like California have played to perfection, but it is one in which other places are likely to catch up, and perhaps even pass. The long-term implications for the nation’s economic geography could prove profound.