You are here: Home1 / Articles2 / Demographics3 / The Coming Age of Dispersion 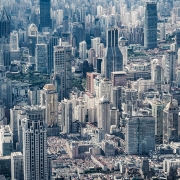 As of this writing, the long-term effects of the coronavirus pandemic remain uncertain. But one possible consequence is an acceleration of the end of the megacity era. In its place, we may now be witnessing the outlines of a new, and necessary, dispersion of population, not only in the wide open spaces of North America and Australia, but even in the megacities of the developing world. Much of this has been driven by high housing prices and growing social disorder in our core cities, as well as the steady rise of online commerce and remote working, now the fastest growing means of “commuting” in the United States.

Pandemics naturally thrive in large multicultural cities, where people live “cheek by jowl” and travel to and from other countries is a fact of international tourism and commerce. Europe’s rapidly advancing infection rate is, to some extent, the product of its weak border controls, one of the EU’s greatest accomplishments. Across the continent, cities have become the primary centers of infection. Half of all COVID-19 cases in Spain, for example, have occurred in Madrid while the Milan region, with its cosmopolitan population and economy, accounts for half of all cases in Italy and almost three-fifths of the deaths.

In the US, known cases and deaths are overwhelmingly concentrated in the Seattle area, Los Angeles, San Francisco, Boston, and New York. Gotham, with six percent of the US population, now accounts by itself for nearly half of the 18,000 cases in the country. Even the New York Times, a consistent booster for packing people into small spaces, now acknowledges that the city’s high densities are responsible for its much higher rate of infection even than relatively dense but far more dispersed areas like Los Angeles, which is equally diverse and global but still consists largely of single family houses.

In places like New York, crowded mass transit systems remain essential to many commuters, while suburban, exurban, and small-town residents get around in the sanctuary of their private cars. These patterns can be seen in a new report by the mid-American think tank Heartland Forward (where I am a senior fellow), which shows how relatively slight the impact has been outside of a few large urban centers on the coasts. Rural areas around the world have been largely spared, at least for now. The North American hinterlands, according to health professionals, benefit from less crowding and unwanted human contact.

Living in dispersion may not save you from contagion, but being away from people, driving around in your own car, and having neighbors you know, does have its advantages in times like these. Even the urban cognoscenti have figured this out—much as their Renaissance predecessors did during typhus and bubonic plague outbreaks, wealthy New Yorkers today are retreating to their country homes where they struggle with the locals over depleted supplies of essentials.

Back to the Dark Ages?

In classical times, plagues devastated Athens, Alexandria, Constantinople, and Rome. Along with barbarian invasions, they reduced the population of the Eternal City from 1.2 million at its height to barely 30,000 by the sixth century. Outside Europe, pandemics devastated cities such as Cairo, Canton, and Harbin. Following the conquest of the New World, the indigenous population suffered massive casualties from exposure to European diseases like smallpox.

The End of New York
Scroll to top