You are here: Home1 / Articles2 / Politics3 / What Really Divides America 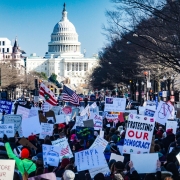 Reading the mainstream media, one would be forgiven for believing that the upcoming midterms are part of a Manichaean struggle for the soul of democracy, pitting righteous progressives against the authoritarian “ultra-MAGA” hordes. The truth is nothing of the sort. Even today, the vast majority of Americans are moderate and pragmatic, with fewer than 20% combined for those identifying as either “very conservative” or “very liberal”. The apocalyptic ideological struggle envisioned by the country’s elites has little to do with how most Americans actually live and think. For most people, it is not ideology but the powerful forces of class, race, and geography that determine their political allegiances — and how they will vote come November.

Of course, it is the business of both party elites — and their media allies — to make the country seem more divided than it is. To avoid talking about the lousy economy, Democrats have sought to make the election about abortion and the alleged “threat to democracy” posed by “extremist” Republicans. But recent polls suggest that voters are still more concerned with economic issues than abortion. The warnings about extremism, meanwhile, are tough to take seriously, given that Democrats spent some $53 million to boost far-Right candidates in Republican primaries.

Republicans are contributing to the problem in their own way, too. Rather than offering any substantive governing vision of their own, they assume that voters will be repelled by unpopular progressive policies such as defunding the police, encouraging nearly unlimited illegal immigration, and promoting sexual and gender “fluidity” to schoolchildren. They ignore, of course, the fact that their own embrace of fundamentalist morality on abortion is also widely rejected by the populace. And even Right-leaning voters may doubt the sanity of some of the GOP’s eccentric candidates this November.

In short, both major parties stoke polarisation, the primary beneficiaries of which are those parties’ own political machines. But most Americans broadly want the same things: safety, economic security, a post-pandemic return to normalcy, and an end to dependence on China. Their divisions are based not so much on ideology but on the real circumstances of their everyday life.

The most critical, yet least appreciated, of these circumstances is class. America has long been celebrated as the “land of opportunity”, yet for working and middle-class people in particular, opportunity is increasingly to come by. With inflation elevated and a recession seemingly on the horizon, pocketbook issues are likely to become even more important in the coming months. According to a NBC News poll, for instance, nearly two-thirds of Americans say their pay check is falling behind the cost of living, and the Republicans hold a 19-point advantage over the Democrats on the economy.

A downturn could also benefit the Left eventually. As the American Prospect points out, proletarianised members of the middle class are increasingly shopping at the dollar stores that formerly served working and welfare populations. Labour, a critical component of the Democratic coalition, could be on the verge of a generational surge, with unionisation spreading to fast food retailers, Amazon warehouses, and Starbucks.

To take advantage of a resurgent labour movement, however, Democrats will have to move away from what Democratic strategist James Carville scathingly calls  “faculty lounge politics”: namely, their obsession with gender, race, and especially climate. For instance, by demanding “net zero” emissions on a tight deadline, without developing the natural gas and nuclear production needed to meet the country’s energy needs, progressives run the risk of inadvertently undermining the American economy. Ill-advised green policies will be particularly devastating for the once heavily Democratic workers involved in material production sectors like energy, agriculture, manufacturing, warehousing, and logistics.

To win in the coming election and beyond, Democrats need to focus instead on basic economic concerns such as higher wages, affordable housing, and improved education. They also need to address the roughly half of all small businesses reporting that inflation could force them into bankruptcy. Some progressives believe that climate change will doom the Republicans, but this is wishful thinking. According to Gallup, barely 3% of voters name environmental issues as their top concern.

INVITE JOEL TO SPEAK
The Revenge of the Material Economy

Do Cities Have a Future?
Scroll to top