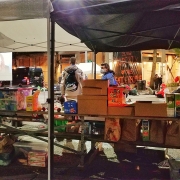 On the surface, progressive “Blue America” has never appeared stronger. President Donald Trump’s leadership failures exposed by the pandemic and the recent disorders, is sinking him in the polls. His rival, Joe Biden, seems likely to concede his traditionally moderate stances to placate the Democrats’ youthful activist and identitarian wings. Radical “transformation” of the United States seems to some just months away.

Yet even as their political power waxes, the woke progressives are engaged in a process of blue-icide, undermining their own urban base of disadvantaged citizens and their own credibility. Such self-destructive tendencies existed even before COVID-19 and the George Floyd upheavals, in the form of crushingly high taxes, regulatory burdens, and dysfunctional schools. The failures of Trump may help progressives in 2020, but their emerging policy agenda seems destined to benefit the red states, conservatives, and, sadly, the far right, later in this decade.

Over the past several years New York, Los Angeles, and Chicago have lost population and San Francisco seems likely soon to join them. Meanwhile the suburbs, exurbs, and sprawling cities of the interior have continued to grow. Politically, almost all the major blue states—New York, New Jersey, Illinois, and even California—are expected to lose seats in the House in the next congressional elections, while the big Sunbelt states, notably Texas, Florida, and Arizona, will gain.

The departure of the urban middle class, with even millennials now joining the exodus, has left cities such as New York increasingly divided between a predominately white and Asian, overclass and a large, and often struggling, predominantly minority population. Without the restraints that traditionally come from a politically engaged middle-class constituency pushing for moderate and necessary reform, urban politics have evolved in directions unlikely to attract desperately needed investment and higher wage jobs in the inner city.

These demographic changes have left the fate of our bluest cities in the hands of radicals such as the increasingly potent Black Lives Matter movement. The blue state political and media establishment, and their allies in the corporate elite, have conceded enormous credibility to a group whose stance is explicitly radical.

Thoroughgoing police reform, the key reason for the Black Lives Matter movement’s growth, is clearly needed. But BLM’s politics go beyond even support for such widely unpopular measures as defunding, or even abolishing, the police and the prison system, and endorsing reparations. The group generally favors radical socialist economics to battle what its founders see as “racial capitalism. ”Besides favoring federal favoritism for Black institutions, it embraces single payer health care, huge tax increases, and other leftist positions that might not appeal to blue state oligarchs. It also condemns Israel as “genocidal.”

Blue state leaders have been slow to recognize—or perhaps slow to acknowledge—that BLM politics are more akin to the Black Panther Party of the 1960s than the Southern Christian Leadership Council. Academic Melina Abdullah, a prominent BLM spokesperson and co-founder of the Los Angeles chapter, is an open admirer of the Nation of Islam and Louis Farrakhan. She describes the protests not as a cry for reform but an “uprising” or “rebellion.” In late May, Abdullah explained: “We’ve been very deliberate in saying that the violence and pain and hurt that’s experienced on a daily basis by Black folks at the hands of a repressive system should also be visited upon, to a degree, to those who think that they can just retreat to white affluence.” Among the areas where rioters visited pain was LA’s traditionally Jewish Fairfax district, where stores were destroyed and synagogues were vandalized and spray-painted with slogans like “Fuck Israel.” A BLM leader in New York has endorsed the armed takeover of neighborhoods, something that has already occurred, with deadly results, in painfully white and hip Seattle.

Joel on Rod Arquette: A Better Future After COVID-19?
Scroll to top