You are here: Home1 / Articles2 / Urban Affairs3 / The Jewish Dilemma 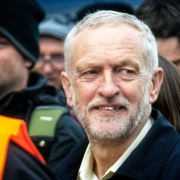 Es iz schwer tzu sein a yid. It is hard to be a Jew.
~Sholem Aleichem

When Britain’s Jews go to the polls next week, they do so at an uncomfortable moment. For the first time in at least a half century, their community—roughly 330,000 citizens—has become a major, if unwelcome, political issue. Labour leader Jeremy Corbyn is a long-standing ally of the Islamic Republic of Iran and its terrorist proxies Hamas and Hezbollah, and a fierce opponent of Israel’s right to exist, so the prospect of him becoming Prime Minister has made Jews nervous. As the New York Times suggests, British Jews are “Labourites practically by birth,” but many of them are likely to vote Conservative this time around.

The dilemma British Jews face is an increasingly common one across Europe. Britain’s Jews may not much like Boris Johnson, as they opposed Brexit by a factor of two-to-one, but many, in the words of the former Chief rabbi Jonathan Sacks, see the prospect of Corbyn’s election as “an existential crisis.” Polls suggest that just six percent of UK Jews plan to vote Labour.

What is occurring in Britain, and much of Europe, reflects changes in the nature of antisemitism. In the past, this oldest of prejudices was widely linked to the far-Right, where it still resides. But in many countries today, the primary instigators of anti-Jewish conspiracism tend to be found on the Left, and often allied with Muslim activists. Under this pressure, it is increasingly dubious that Europe’s Jewish communities can do anything but decline.

Whether from the Right or the Left, from Muslims, reactionary Christians, or progressive Greens, European Jews are confronted by a threat not seen since the 1930s. Some 90 percent of European Jews, according to recent surveys, have experienced antisemitic incidents, and more than 80 percent of European Jews aged 16 to 34 believe antisemitism is a growing problem in their countries. According to a recent EU survey, half of German and Belgian Jews and well over a third of Jews in France, the United Kingdom, and Sweden report being harassed for their religious affiliation; the rates have grown everywhere over the past five years.

If these trends persist, we can expect Europe’s Jewish populations to erode further. The triumph of Corbyn—a man 87 percent of British Jews polled believe to be an antisemite—could cause nearly half to “seriously consider” emigrating, most likely to more congenial places like Israel, the United States, Australia, and Canada. France’s Jewish population, the largest in Europe, has been sustained largely by the mass migration from North Africa, although that source has pretty much dried up now. Even so, France still has fewer Jews than it did in 1939 and that number seems destined to continue shrinking. Since 2000, nearly 50,000 Jews have left, mostly for Israel, the United States, or Canada

In fact, it’s hard to find a place in Europe—with the odd exception perhaps of Hungary—where Jewish prospects are anything but dismal. Eastern Europe, the center of the Jewish world in 1939 with its eight million Jews, has less than 400,000 today. Germany, home to 500,000 Jews in 1933, now has as little as a third of that, most originally refugees from eastern Europe. Fewer than 15,000 of the Jews living in Germany today can trace their roots to the pre-Nazi era.

Read the rest of the piece at Quillette.

Joel Kotkin is the Presidential Fellow in Urban Futures at Chapman University and Executive Director for the Center for Opportunity Urbanism. His last book was The Human City: Urbanism for the Rest of Us (Agate, 2017). His next book, The Coming of Neo-Feudalism: A Warning to the Global Middle Class, will be published early next year. You can follow him on Twitter Twitter @joelkotkin