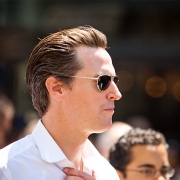 The Golden State is on a path to high-tech feudalism, but there’s still time to change course.

“We are the modern equivalent of the ancient city-states of Athens and Sparta. California has the ideas of Athens and the power of Sparta,” declared then-governor Arnold Schwarzenegger in 2007. “Not only can we lead California into the future . . . we can show the nation and the world how to get there.”

When a movie star who once played Hercules says so who’s to disagree? The idea of California as a model, of course, precedes the former governor’s tenure. Now the state’s anti-Trump resistance—in its zeal on matters concerning climate, technology, gender, or race—believes that it knows how to create a just, affluent, and enlightened society. “The future depends on us,” Governor Gavin Newsom said at his inauguration. “And we will seize this moment.”

In truth, the Golden State is becoming a semi-feudal kingdom, with the nation’s widest gap between middle and upper incomes—72 percent, compared with the U.S. average of 57 percent—and its highest poverty rate. Roughly half of America’s homeless live in Los Angeles or San Francisco, which now has the highest property crime rate among major cities. California hasn’t yet become a full-scale dystopia, of course, but it’s heading in a troubling direction.

This didn’t have to happen. No place on earth has more going for it than the Golden State. Unlike the East Coast and Midwest, California benefited from comparatively late industrialization, with an economy based less on auto manufacturing and steel than on science-based fields like aerospace, software, and semiconductors. In the mid-twentieth century, the state also gained from the best aspects of progressive rule, culminating in an elite public university system, a massive water system reminiscent of the Roman Empire, and a vast infrastructure network of highways, ports, and bridges. The state was fortunate, too, in drawing people from around the U.S. and the world. The eighteenth-century French traveler J. Hector St. John de Crèvecœur described the American as “this new man,” and California—innovative, independent, and less bound by tradition or old prejudice—reflected that insight. Though remnants of this California still exist, its population is aging, less mobile, and more pessimistic, and its roads, schools, and universities are in decline.

In the second half of the twentieth century, California’s remarkably diverse economy spread prosperity from the coast into the state’s inland regions. Though pockets of severe poverty existed—urban barrios, south Los Angeles, the rural Central Valley—they were limited in scope. In fact, growth often favored suburban and exurban communities, where middle-class families, including minorities, settled after World War II.

In the last two decades, the state has adopted policies that undermine the basis for middle-class growth. State energy policies, for example, have made California’s gas and electricity prices among the steepest in the country. Since 2011, electricity prices have risen five times faster than the national average. Meantime, strict land-use controls have raised housing costs to the nation’s highest, while taxes—once average, considering California’s urban scale—now exceed those of virtually every state. At the same time, California’s economy has shed industrial diversity in favor of dependence on one industry: Big Tech. Just a decade before, the state’s largest firms included those in the aerospace, finance, energy, and service industries. Today’s 11 largest companies hail from the tech sector, while energy firms—excluding Chevron, which has moved much of its operations to Houston—have disappeared. Not a single top aerospace firm—the iconic industry of twentieth-century California—retains its headquarters here.

Though lionized in the press, this tech-oriented economy hasn’t resulted in that many middle- and high-paying job opportunities for Californians, particularly outside the Bay Area. Since 2008, notes Chapman University’s Marshall Toplansky, the state has created five times the number of low-paying, as opposed to high-wage, jobs. A remarkable 86 percent of new jobs paid below the median income, while almost half paid under $40,000. Moreover, California, including Silicon Valley, created fewer high-paying positions than the national average, and far less than prime competitors like Salt Lake City, Seattle, or Austin. Los Angeles County features the lowest pay of any of the nation’s 50 largest counties.

No state advertises its multicultural bona fides more than California, now a majority-minority state. This is evident at the University of California, where professors are required to prove their service to “people of color,” to the state’s high school curricula, with its new ethnic studies component. Much of California’s anti-Trump resistance has a racial context. State Attorney General Xavier Becerra has sued the administration numerous times over immigration policy while he helps ensure California’s distinction as a sanctuary for illegal immigrants. So far, more than 1 million illegal residents have received driver’s licenses, and they qualify for free health care, too. San Francisco now permits illegal immigrants to vote in local elections.

Such radical policies may make progressives feel better about themselves, though they seem less concerned about how these actions affect everyday people. California’s Latinos and African-Americans have seen good blue-collar jobs in manufacturing and energy vanish. According to one United Way study, over half of Latino households can barely pay their bills. “For Latinos,” notes long-time political consultant Mike Madrid, “the California Dream is becoming an unattainable fantasy.”

In the past, poorer Californians could count on education to help them move up. But today’s educators appear more interested in political indoctrination than results. Among the 50 states, California ranked 49th in the performance of low-income students. In wealthy San Francisco, test scores for black students are the worst of any California county. Many minority residents, especially African-Americans, are fleeing the state. In a recent UC Berkeley poll, 58 percent of black expressed interest in leaving California, a higher percentage than for any racial group, though approximately 45 percent of Asians and Latinos also considered moving out.

Perhaps the biggest demographic disaster is generational. For decades, California incubated youth culture, creating trends like beatniks, hippies, surfers, and Latino and Asian art, music, and cuisine. The state is a fountainhead of youthful wokeness and rebellion, but that may prove short-lived as millennials leave. From 2014 to 2018, notes demographer Wendell Cox, net domestic out-migration grew from 46,000 to 156,000. The exiles are increasingly in their family-formation years. In the 2010s, California suffered higher net declines in virtually every age category under 54, with the biggest rate of loss coming among the 35-to-44 cohort.

As families with children leave, and international migration slows to one-third of Texas’s level, the remaining population is rapidly aging. Since 2010, California’s fertility rate has dropped 60 percent, more than the national average; the state is now aging 50 percent more rapidly than the rest of the country. A growing number of tech firms and millennials have headed to the Intermountain West. Low rates of homeownership among younger people play a big role in this trend, with California millennials forced to rent, with little chance of buying their own home, while many of the state’s biggest metros lead the nation in long-term owners. California is increasingly a greying refuge for those who bought property when housing was affordable.