You are here: Home1 / Articles2 / Politics3 / The Coronavirus Reopened America’s Wounds — and Poured Salt in T... 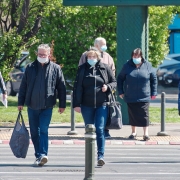 Yes, the coronavirus hit the president and his White House hard, likely because of the irresponsible choices this president has made, but let’s not kid ourselves: The virus has devastated with alarming efficiency minorities and the impoverished, particularly in cities, while accelerating America’s return to a more hierarchical and far less democratic society.

The virus has been inconvenient for the affluent, many of whom still could work comfortably from home and who suffered far lower rates of infection. And it’s been a boon for the elite bureaucracy and even more so for the already fantastically wealthy tech oligarchs whose ownership of people’s data is even more valuable with shopping and entertainment largely online.

That’s nothing new. Faced with pestilence in crowded cities, the wealthy in past centuries often escaped to country estates and rentals, as they have this year. Of course, some of those escapees died, too, but at a far lower rate than the hoi polloi. Whether in the towering insulae of Rome, medieval hovels, or the tenements of the Lower East Side, the poor have always been hit first and hardest by economic dislocation, infection, and death. Although far less lethal, COVID-19 has followed this pattern.

The biggest problem lies with what demographer Wendell Cox labels “exposure density,” which results from insufficiently ventilated places like crowded housing, transit, elevators and office environments. Poor people, as a new paper suggests, are far less able to socially distance either at home or at work. As race and class often overlap in America, whites are roughly twice as likely to telecommute as African Americans or Hispanics.

Poverty seems to be the common thread. Even in lower density areas like native American reservations and along the Mexican border, poorer people often live in crowded, pandemic-friendly unventilated places. The worst-hit areas have been those with both high rates of poverty and household crowding, like New York’s outer boroughs and Chicago’s south and west sides. Although California’s infection rate has been lower, the worst effects by far have been felt in impoverished parts of Los Angeles County—home to five of the 10 most crowded zip codes in the U.S. In Houston, poor areas like the First and Third Wards have experienced far higher rates of infection and fatalities. An analysis by the Houston Chronicle revealed that seven of the 10 zip codes with the highest rates of infection were majority-black and low-income communities. Some suffered double or triple the county’s (already high for Texas) average per-capita rate.

Will the Cultural Revolution Be Canceled?
Scroll to top