You are here: Home1 / Articles2 / Politics3 / The Coronavirus is Also Spreading a Dark New Era of Neo-Feudalism 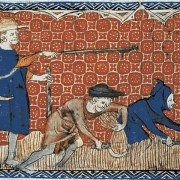 Adapted from The Coming of Neo-Feudalism (Encounter Books).

The COVID-19 pandemic is accelerating the global shift already underway towards a neo-feudal society. With the middle-class economy largely shut down and, in the best-case scenario, in for a long and painful recovery, the population that is barely hanging on is expanding rapidly in America and around the world. In the U.S. alone, the ranks of the poor are projected to increase by as much as 50 percent, to levels not seen in at least a half century.

Neo-feudalism is reprising the kind of society that existed in Medieval times, characterized by declining social mobility and greater concentrations of power. In the neo-Feudal world, as in the original, the middle class loses its primacy, as small businesses fail and even affluent families face the prospect of joining the ranks of ever expanding class of property-less serfs.

Yet not all will be losers—the tech oligarchs, whose net worths have surged during the pandemic, are now positioned to pick up the pieces of a devastated analog economy. But the class that may benefit most may be the Clerisy, encompassing professions such as teachers, consultants, lawyers, top level government officials and medical specialists. Their share of the labor market has grown while those of the traditional middle class — small business owners, workers in basic industries and construction — have shrunk.

Many in the Clerisy has barely been discomfited by the pandemic as they continue to have checks deposited while working largely from home. Some members of the “expert” class — medical professionals in white coats, empowered bureaucrats and the media that interprets their prognostications — have emerged as “the privileged stratum”, in the words of the French leftist Christophe Guilluy, operating from an assumption of “moral superiority” that justifies their right to instruct others.

Just as the tech oligarchs, having conquered and consolidated the digital economy, have assumed the predominant role of the old feudal aristocracy, the Clerisy reprises the role once played by the Catholic clergy. Samuel Coleridge coined the term in the 1830s to define a class of people whose job it was to instruct and direct the masses, as traditional clerics were joined by university professors, scientists, public intellectuals and foundation heads.

Like the elites of Medieval times, today’s clerisy has become increasingly hereditary in part due to the phenomena of well-educated people marrying each other; between 1960 and 2005 the share of men with university degrees who married women with university degrees nearly doubled, from 25% to 48%. “After one generation,” Daniel Bell noted in 1972, “a meritocracy simply becomes an enclaved class.”

Read the rest of this piece on The Daily Beast.

Preserving Opportunity for the Global Middle Class
Scroll to top