You are here: Home1 / Articles2 / Demographics3 / Ohio and the Battle for Populist America 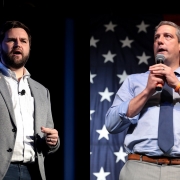 This midterm year, in which many states have to choose between non-entities and the certifiably insane, Ohio is blessed by a real political dogfight. The Senate battle between representative Tim Ryan and Hillbilly Elegy author, JD Vance, is becoming one for the ages.

At issue is the very nature of populism. The 38-year-old Vance, a Republican who emerged from Appalachian poverty to serve in the Marines and attend Yale Law School, epitomises the grassroots radicalism of the Scots-Irish in America: anti-elitist, culturally conservative, sceptical toward draconian climate policies and hostile toward China. Ryan, after 20 years as the Democratic representative from the former industrial stronghold of Northeast Ohio, touts a more traditional, pro-union, but also firmly anti-globalist politics.

The state’s size, and its location in the politically volatile Midwest, render it a critical battleground. Ohio is home to 11 million people, making it the seventh largest state in the union. It has all the basic components of 21st-century America: challenged, largely minority cities such as Cleveland and Toledo, relatively prosperous Cincinnati, an emerging boom town in Columbus (the university town that also serves as state capital), and a vast array of rural towns and villages.

Ohio may no longer be the decisive “bellwether” of America — it has been trending Republican for over a decade — but it is still a competitive state. Veteran political scientist Herb Asher notes that despite its GOP leanings, Ohio remains open for Democratic challengers in a way that is hard to imagine in deep-red states such as Texas. In Ohio, successful Democrats are not gentry types like California Governor Gavin Newsom, but hard-bitten, pro-working class New Dealers like Senator Sherrod Brown. Ryan is cut from much the same cloth. At a time of heated polarisation, he has cast himself as a folksy, open-minded family man who puts country over party.

To his credit, Ryan has been willing, at least on the campaign trail, to declare his independence from Democratic orthodoxy. He has supported fracking and opposed Joe Biden’s student-loan forgiveness scheme. He has praised Trump’s protectionism and opposition to China. He does not much appeal to the tech-and-finance elites who now dominate the Democratic Party — one reason, suggests Midwest scholar John Russo, that he has been slow to attract big donor money.

Vance, by contrast, is not a great candidate. On stage, the hillbilly turned intellectual and venture capitalist is rigid and off-putting — you would rather sink a couple of bourbons with Ryan. Even Vance’s populism seems less people-friendly than Ryan’s. Vance’s biggest blessing, and greatest curse, is Donald Trump, who carried Ohio twice, and whose endorsement saved Vance in a hard-fought Republican primary. Like many conservative intellectuals, Vance opposed Trump at first but then quickly cosied up to him after he won. Ryan has not hesitated to make hay of this about-face, saying that Ohio needs “an ass-kicker not an ass-kisser”.

The outcome of the race will depend on two swing demographics: working-class whites and suburbanites. According to Russo, the fall-out from the Supreme Court’s abortion decision, combined with the increasingly rancid stench of Trumpism, could alienate affluent suburban voters, particularly in burgeoning cities such as Columbus. “The middle-class suburban moderate voter is the key for Ryan,” Russo notes.

The Future of Cities
Scroll to top