You are here: Home1 / Articles2 / In the News3 / Is the Big Cities Boom Over? Joel Kotkin and Richard Florida Debate on... 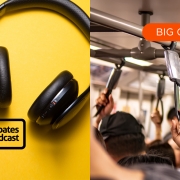 Does the COVID-19 pandemic spell the end of the big cities boom?

The COVID-19 pandemic has swept across the globe, but it’s our cities that have felt the greatest impact. Research shows that 95% of people infected with the virus live in urban areas. Supporters of big city living say people have been too quick to blame density as the culprit behind contagion. They say the pandemic offers us the chance to address the more complex issues that drive infection to build a new generation of inclusive cities where everybody want to live. Critics of big cities say the pandemic has exposed the flaws in contemporary urban planning which have emphasized the virtues of density and mass transit at the expense of safety and people’s lives. They argue that as our hyperconnected world moves into an era of ongoing pandemics, de-densification is the only way to go.

Listen to the debate at Munk Debates.

Joel Kotkin has recently published The Coming of Neo-Feudalism: A Warning to the Global Middle Class. In this book Kotkin argues that tech oligarchs are wiping out the middle class and turning some cities into luxury enclaves. During the debate Joel Kotkin also refers to his book The City: A Global History.

Richard Florida is renowned for his best-selling book The Rise of the Creative Class in which he describes the new social class of creative workers and the vital role they play in the economy and in transforming cities into vibrant places to live. In The New Urban Crisis: How Our Cities Are Increasing Inequality, Deepening Segregation, and Failing the Middle Class-and What We Can Do About It Richard Florida looks at the dark side of the creative economy.

During the debate both Richard and Joel describe how COVID-19 has exposed racial and class divisions within cities.

INVITE JOEL TO SPEAK
Joel Kotkin talks to Quillette’s Toby Young About the Pandemic and its...