You are here: Home1 / Articles2 / Politics3 / How to Rebuild the Republican Party After Trump’s Disasters 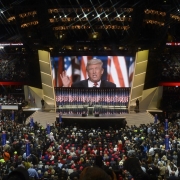 The COVID-19 pandemic that has killed more than 150,000 Americans is likely to end the woeful presidency of Donald Trump. With the economy, once his strongest suit, in tatters, and two-thirds of Americans disapproving of his handling of the pandemic as well as broad disapproval of how he dealt with recent racial unrest, both Trump and his Republican Party may face a harsh reckoning this fall.

The removal of Trump is also a necessary step to the repositioning of the GOP. Of course, some Trumpian elements will remain. The prospects for reprising the country club Republicanism of the past are dim. There is no groundswell for a return of militant neoconservatives to power, or for a restoration of lopsided trade policies, long backed by many corporate leaders from both parties, that has so damaged America’s middle and working classes.

Whether the post-Trump era starts this November or in 2024, the Republicans will need to build on the working-class base, including many Democrats and independents who supported Trump in 2016. But to establish itself as a viable aspirational party, one that supports upward mobility for most Americans, it will have to appeal to minority communities, which now tilt overwhelmingly to the Democrats. Today barely 58% of all working-class Americans are white; according to a 2016 Economic Policy Institute study, people of color will become the majority of the working class by 2032.

As Mike Barone, the political analyst, has shown, American political parties are the ultimate shape-shifters, changing along with economic conditions, demographics and social attitudes. The Democrats were once the party of slavery and rich agriculturalists, then segregationists who allied with big labor and inner-city political machines. The Republicans were once the party of Abraham Lincoln’s Midwestern populism, embracing the interest of the farmers and small businesses. Only later did the party become fully identified with big money interests, the upper-class industrialists and nativists fearful of the country’s growing diversity.

Today’s Democrats oddly resemble the old Republicans. The upper class, notably on Wall Street and Silicon Valley, are increasingly Democratic. The contributions of roughly 80 percent of tech employees, as well as their bosses, the wealthiest individuals on the planet, back the Democrats. Former Microsoft CEO Steve Ballmer, Facebook co-founder Dustin Moskovitz, Laurene Powell Jobs, and media moguls Michael R. Bloomberg and Barry Diller now stand as pillars of the so-called “party of the people.”

This pattern, already notable in 2016, can also be seen now as Democrats represent 41 of the 50 wealthiest congressional districts. Winning over more of these generally well-educated voters requires a program that addresses their needs: good and skills-oriented public schools, extensive park systems, single-family zoning, more equitable tax and energy policies, and allowing, when warranted, new business and job development on the urban periphery.

This should not be impossible; both Richard Nixon and Ronald Reagan won suburbanites while eroding the old Democratic working-class base. But at this point, the reinvention of the Republican Party, particularly in California, is unlikely to come from leaders with national profiles, like Republican senators, even if the GOP holds on to the Senate in November. For the most part, those leaders have been in lockstep approval of Trump’s policies.

Far more likely to reshape the GOP, or at least have ideas on which to build a post-Trump agenda, are a new group of thinkers and local officials who have proved their competence and willingness to challenge the current White House.