You are here: Home1 / Articles2 / Politics3 / How the Democrats Fell for Mussolini 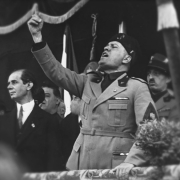 There’s a tendency today to see Benito Mussolini as a pathetic sideshow, an incompetent blusterer who went from Adolf Hitler’s idol to his lapdog. Yet in many ways, Mussolini’s notion of fascism has become increasingly dominant in much of the world, albeit in an unexpected form: in the worldview of those progressives who typically see “proto-fascism” lurking on the Right.

Mussolini, a one-time radical socialist, viewed himself as a “revolutionary” transforming society by turning the state into “the moving centre of economic life”. In Italy and, to a greater extent, Germany, fascism also brought with it, at least initially, an expanded highly populist welfare state much as we see today.

Indeed, Mussolini’s idea of a an economy controlled from above, with generous benefits but dominated by large business interests, is gradually supplanting the old liberal capitalist model. In the West, for example, the “Great Reset,” introduced by the World Economic Forum’s Klaus Schwab, proposes an expanded welfare state and an economy that transcends the market for the greater goal of serving racial and gender “equity”, as well as saving the planet.

Wherever it appears, whether in the early 20th century or today, fascism — in its corporate sense — relies on concentrated economic power to achieve its essential and ideological goals. In 1922, for instance, large corporations and landowners helped finance Mussolini’s Black Shirts for their March on Rome. Confindustria, the leading organisation of Italian industrialists, was glad to see the end of class-based chaos and welcomed the state’s infrastructure surge.

Elsewhere, the German cartels and Japanese zaibatsu both kowtowed to and benefited from fascist state support and contracts. Even today, China, in many aspects the model fascist state of our times, follows Il Duce’s model of cementing the corporate elite into the power structure. Since 2000, a hundred billionaires sit in the country’s Communist legislation, a development that Mao would never have countenanced.

Capitalist countries have historically resisted such concentrations of power, but this process seems inexorable after a pandemic which devastated small businesses yet saw the ultra-rich grow richer and the largest firms record eye-watering profits. A handful of giant tech corporations now account for nearly 40% of the value of the Standard and Poor Index, a level of concentration unprecedented in modern history.

Companies like Amazon are our zaibatsu, with influence over a vast array of industries, from online retail to cloud computing, the health food business, media and even space travel. Once such firms may have adhered to free market capitalism, but they have increasingly grown to see the value of a larger, more centralised and pervasive state.

The (Next) Great Migration
Scroll to top