You are here: Home1 / Articles2 / California3 / An “Ecotopian” Future: Can California’s Green Extremism... 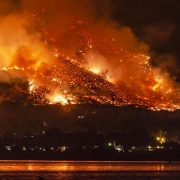 They paved paradise…And put up a parking lot…With a pink hotel, a boutique…And a swinging hot spot…Don’t it always seem to go…That you don’t know what you’ve got ‘til it’s gone — Joni Mitchell, “Big Yellow Taxi,” 1970

One is often at a loss to explain California to people from other planets—like, say, earth. This is a state that issues mandates for electrification of everything while reducing its generating capacity. It blames devastating fires on climate change, without taking the blame for forestry practices that helped make the seasonal fires much worse. In California, pot is legal, but owning a car with a gas engine, however clean, may soon not be, and climate skeptics of any stripe face opprobrium, consignment to obscurity, and—if they have assets—court dates.

To understand how a state could adopt what often seem insane policies, impoverishing its people while claiming the mantle of social justice, you need to consult the state’s unique history. California is just not like other places, and you won’t get anywhere without understanding that. With few navigable rivers and a lack of water near its coast and fertile valleys, the state largely engineered its own rise. “Science is the mother of California,” said the University of California’s second president, Daniel Coit Gilman. Largely dominated by desert, flammable dry chaparral and high mountains, California depended on bringing water to its bone-dry coast, tapping electricity from distant dams, and accommodating a massive influx of new residents with largely suburban housing.

The state’s rapid population growth from 1.5 million in 1900 to nearly 40 million today placed enormous strains on its natural systems. During the Gold Rush, mining practices devastated the Mother Lode country and poisoned the rivers. In the rest of the state, natural scrubland was converted first into farms, then into housing tracts, wiping out whole ecosystems. Those who grew up here, from Jerry Brown to Joni Mitchell, or who have lived here long, like this writer—nearly a half-century resident—have witnessed immense changes. We’ve seen the citrus orchards all but vanish from the coast, the massive 1969 Santa Barbara oil spill, ever-more suffocating traffic congestion, and the densification of many communities. It’s hard not to harken back to “better times” when the grove near your house is now a Target.

Still, where these real challenges, along with concerns over climate change, might have encouraged constructive solutions, they have instead metastasized the apocalyptic side of modern environmentalism. Predictably, The New York Times suggests that California is “ground zero for climate disasters,” while the Los Angeles Times claims that California now fights not just fires and droughts but “climate despair.” A letter to the editor insists that the state is already “a climate change hell,” a logical conclusion to reach, judging by media coverage of the recent fires. That voice of establishment reasoning, the Council on Foreign Relations, helpfully chimes in that “California is a Preview of Climate Change’s Devastation for the Entire World.”

In California, we appear to have made the transition from awesome to awful.

The Origins of Environmental Politics

The “pastoral ideal,” historian Leo Marx noted, “has been used to define the meaning of America ever since the age of discovery.” Initially, it reflected the Jeffersonian vision of a nation of farmers, but gained adherents among the gentry in the rapidly developing industrial areas of New England, New York, and the Hudson Valley.

Modern environmentalism, though, is largely a California product. To some, particularly the ecological Left, environmental rapine is to California what the legacy of slavery has been to the South.

In a state where the frontier closed quickly, and wilderness confronted the consequences of extraordinarily rapid growth, the well-born sought ways to preserve something of our spectacular natural state. The Sierra Club, still the leading environmental lobby, gained prominence campaigning early in the last century against the flooding of Hetch Hetchy Valley in Yosemite to supply water to largely waterless San Francisco. This struggle presaged an almost endless succession of battles across the state over land use, energy, and water development. When the Sierra Club’s solutions seemed too tame, the Friends of Earth, also founded in San Francisco, rose to fill the gap, establishing a pattern of steady radicalization.

In their early days, California greens were largely conservationist, with a bipartisan base of affluent suburban homeowners, mostly in the coastal areas, who looked askance at development closing in on their once-pristine neighborhoods. By the late 1960s, however, greens increasingly embraced often-hysterical scenarios of a dystopian future. Stanford’s Paul Ehrlich published The Population Bomb in 1968, forging a deep impression with its predictions of starvation on a global scale. Inspired by Rachel Carson’s 1962 Silent Spring, others worried, sometimes justifiably, about the effects of pesticides, the speculated-upon environmental causes of cancer, and potential disasters from nuclear power.