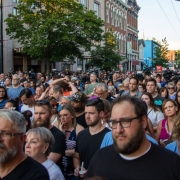 This week, the troubled state of American democracy was on display in the reactions to the mass shootings in Texas and Ohio. To the establishment Left, led by the New York Times, the El Paso shooter operated as if he were a white nationalist acting on orders from Donald Trump. Some on the right, meantime, linked the Dayton shooter’s actions to Antifa. In a healthy political environment, Americans, regardless of political views, would consider these tragedies the heinous actions of disturbed people, motivated mostly by a dangerous combination of madness and ideology. But in our warped political climate, everyone assumes that their enemies want to kill them.

Our political polarization reflects a decline in the notion of American identity. Tribalism on the left has supplanted foundational ideals of citizenship. Representative Ayanna Pressley recently insisted that blacks, Hispanics, gays, and members of other minority groups must promote identity-first politics over any notion of the common good; failure to do so, she suggested, is a betrayal of the group. In addition, progressive Democrats have effectively championed open borders, advocating the removal of criminal penalties for border-crossers, who also would get free health care not readily available to most American citizens. Such views represent the triumph of identity politics over the civic ideal of E Pluribus Unum.

Gage Skidmore Will The Democrats End Up Saving The California Republican Party?
Scroll to top