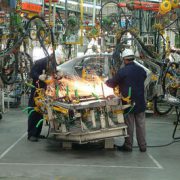 If California is to change course and again become a place of opportunity, the impetus is likely to come not from the perennially shrinking Republican Party but from working-class and middle-class Democrats.

This group, long quiescent, has emerged most notably in opposition to the state’s anti-global warming cap-and-trade policies, which will force up energy prices. Recently, some 16 Democratic Assembly members, led by Fresno’s Henry Perea, asked the state to suspend the cap-and-trade program, which will add as much as a dollar to what already are among the highest gasoline prices in the nation.

In some senses, this budding blue-collar rebellion exposes the essential contradiction between the party’s now-dominant gentry Left and its much larger and less well-off voting base. For the people who fund the party – public employee unions, Silicon Valley and Hollywood – higher energy prices are more than worth the advantages. Public unions get to administer the program and gain in power and employment while venture capitalists and firms, like Google, get to profit on mandated “green energy” schemes.

What’s in it for Hollywood? Well, entertainment companies are shifting production elsewhere in response to subsidies offered by other states, localities and companies, so high energy costs and growing impoverishment across Southern California doesn’t figure to really hurt their businesses. Furthermore, by embracing “green” policies, the famously narcissistic Hollywood crowd also gets to feel good about themselves, a motivation not to be underestimated.

This upside, however, does not cancel out hoary factors such as geography, race and class. One can expect lock-step support for any proposed shade of green from most coastal Democrats. Among lawmakers, the new Democratic dissenters don’t tend to come from Malibu or Portola Valley. They often represent heavily Latino areas of the Inland Empire and Central Valley, where people tend to have less money, longer drives to work and a harder time affording a decent home. Cap and trade’s impact on gasoline prices – which could approach an additional $2 a gallon by 2020 – is a very big deal in these regions.

Many of these same people historically have worked in industries such as manufacturing and logistics, industries that rely on reasonable energy prices. Companies in these fields increasingly seek locations in lower-cost states, such as Washington, Oregon, Texas, Utah and Arizona, taking generally high-paying blue-collar jobs with them. It’s rare to find a manufacturer, for example, who would move to or expand in, California, outside of a handful of subsidized firms. Even ethnic-food companies are looking elsewhere, despite the fact that the raw materials and a large local market exist here.

The dispute in California over cap and trade – where government limits businesses’ greenhouse gas emissions, and higher-emitting companies buy allowances to exceed their limits – may just be the harbinger of a wider conflict within the party nationally. In Washington, D.C., there is tension between East Coast and West Coast Democrats on one side and representatives from the Plains and the South on the other. Progressives shrug at the loss of these regions and the associated white working-class voters who, as the liberal website Daily Kos contended earlier this year, are just a bunch of racists, anyway.

But, at least here in California, much of the working class is made up of minorities, who are increasingly the economic victims of the enlightened ones. One place to see this is in Richmond in Northern California, where a Green Party mayor and a similarly aligned planning department have tried to block the refurbishing of Chevron’s large refinery there, which is also the economic bulwark of the area.

The dispute over the refinery suggests divisions that may become more commonplace. Essentially, you have on one side overwhelmingly white, often very-affluent greens, allied with powerful Democratic politicians, arrayed to obstruct the refinery. On the other side, you have minorities, many of them union members, whose livelihoods and high-paying jobs depend on the refinery.

The incipient rift between such blue-collar workers and gentry Democrats is inevitable. The wealthy donors who dominate both local and national Democratic politics, like San Francisco hedge fund mogul Tom Steyer, may have made much of their fortunes in fossil fuels, as the New York Times, among others, have reported. But now, having embraced a stringent environmentalism, the gentry seek to impose their “green” agenda on the hoi polloi. If this hypocrisy isn’t disturbing enough, consider the increasingly top-down nature of environmentalist politics. In the past, conservationists focused on how to protect people from harm and preserve nature, in part, so people might enjoy it.

Many of today’s progressives not only are determined to protect their privileges, but seek to limit the opportunities for pretty much everyone else. People like Steyer, for example, who is close to both the Obama White House and Senate Majority Leader Harry Reid, can enjoy their vast estates, while supporting policies that make it improbable for middle-class families to afford a home with a decent back yard.

In many ways, their approach is reminiscent of the old British aristocracy, who combined a passion for preserving nature within their lands with a commitment to limiting its accessibility to the masses. People like billionaire venture capitalist Vinod Khosla are big on being green, but don’t want their less well-endowed neighbors to access the beach near their estates. It’s “Animal Farm” for the ecological age: Some animals, it seems, are more equal – and righteously green – than others.

With virtual strangleholds on much of the media, academia and the punditry, the gentry and their allies may be able to limit coverage of this inherent conflict, but it will be difficult to suppress forever the essential contradictions between the gentry and everyone else.

Democratic strategists hope that, by focusing on social issues – immigration, abortion and gay rights – they can keep the peasants in line. And to be sure, Republicans pushing nativism and social conservatism seem determined to distract Latinos, Asians, women and gays from focusing on the realities of an increasingly neofeudalist California. Political analyst Michael Lind contends this Democratic strategy may not succeed over time. For one thing, he notes, differences on many social issues are narrowing, in part, as more minorities, singles and gays move into suburban or exurban locales.

As social issues become less heated, political divides figure to develop more along economic lines. This conflict may prove no easier to resolve than the GOP’s internal struggle between the Tea Party and corporatists. The Democratic divide will pit much of the party’s financial and media base, in Hollywood and Silicon Valley, against the interests and aspirations of middle- and working-class people who make up the vast majority of Democratic voters.

For those who enjoy political combat, this schism guarantees more sharp divisions among the Democrats. More importantly, this conflict should generate greater debate about correcting our current course, which would be good news for the rest of us.

This article first appeared in the Orange County Register.

Joel Kotkin is executive editor of NewGeography.com and Distinguished Presidential Fellow in Urban Futures at Chapman University, and a member of the editorial board of the Orange County Register. He is author of The City: A Global History and The Next Hundred Million: America in 2050. His most recent study, The Rise of Postfamilialism, has been widely discussed and distributed internationally. He lives in Los Angeles, CA.

INVITE JOEL TO SPEAK
NAIOP HoustonMillennial Boomtowns: Where The Generation Is Clustering (It’s Not Do...
Scroll to top