You are here: Home1 / Articles2 / Demographics3 / Why America’s Young And Restless Will Abandon Cities For Suburbs
Appearing in:

For well over a decade urban boosters have heralded the shift among young Americans from suburban living and toward dense cities. As one Wall Street Journal report suggests, young people will abandon their parents’ McMansions for urban settings, bringing about the high-density city revival so fervently prayed for by urban developers, architects and planners.

Some demographers claim that “white flight” from the city is declining, replaced by a “bright flight” to the urban core from the suburbs. “Suburbs lose young whites to cities,” crowed one Associated Press headline last year.

Yet evidence from the last Census show the opposite: a marked acceleration of movement not into cities but toward suburban and exurban locations. The simple, usually inexorable effects of maturation may be one reason for this surprising result. Simply put, when 20-somethings get older, they do things like marry, start businesses, settle down and maybe start having kids.

An analysis of the past decade’s Census data by demographer Wendell Cox shows this. Cox looked at where 25- to 34-year-olds were living in 2000 and compared this to where they were living by 2010, now aged 35 to 44. The results were surprising: In the past 10 years, this cohort’s presence grew 12% in suburban areas while dropping 22.7% in the core cities. Overall, this demographic expanded by roughly 1. 8 million in the suburbs while losing 1.3 million in the core cities. 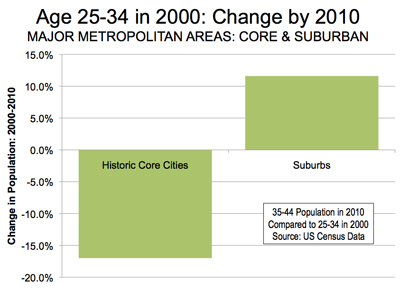 In many ways this group may be more influential than the much ballyhooed 20-something. Unlike younger adults, who are often footloose and unattached, people between the ages of 35 and 44 tend to be putting down roots. As a result, they constitute the essential social ballast for any community, city or suburb.

Losing this population represents a great, if rarely perceived, threat to many regions, particular older core cities. Rust Belt centers such as Cleveland and Detroit have lost over 30% of this age group over the decade.

More intriguing, and perhaps counter-intuitive, “hip and cool” core cities like San Francisco, New York and Boston have also suffered double-digit percent losses among this generation. New York City, for example, saw its 25 to 34 population of 2000 drop by over 15% — a net loss of over 200,000 people — a decade later. San Francisco and Oakland, the core cities of the Bay Area, lost more than 20% of this cohort over the decade, and the city of Boston lost nearly 40%.

In contrast, the largest growth among this peer group took place in metropolitan areas largely suburban in form, with a strong domination by automobiles and single-family houses. The most popular cities among this group — with increases of over 10% — were Las Vegas; Raleigh, N.C.; Riverside-San Bernardino, Calif.; Charlotte, N.C.; Orlando, Fla.; San Antonio, Houston and Dallas-Fort Worth, in Texas; and Sacramento, Calif.. 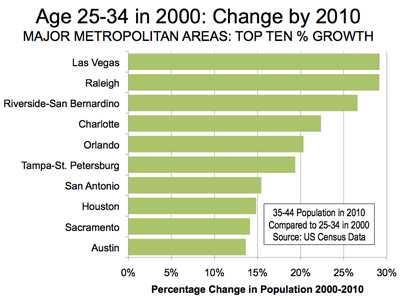 Furthermore, most of the growth took place not in the urban centers of these regions but in the outlying suburbs. This cohort expanded by more than 40% Raleigh’s suburbs — 37,000 people — over the decade. Houston’s suburbs gained the most of any region of the country, adding 174,000 members of this particular generation.

These findings should inform the actions of those who run cities. Cities may still appeal to the “young and restless,” but they can’t hold millennials captive forever. Even relatively successful cities have turned into giant college towns and “post-graduate” havens — temporary way stations before people migrate somewhere else. This process redefines cities from enduring places to temporary resorts.

Rather than place all their bets on attracting 20-somethings cities must focus on why early middle-age couples are leaving. Some good candidates include weak job creation, poor schools, high taxes and suffocating regulatory environments. Addressing these issues won’t keep all young adults in urban settings, but it might improve the chances of keeping a larger number.

Our findings may also give pause to those developers who often buy at face value the urbanist narrative about an city-centric real estate future. In the last decade, many developers have anticipated  a continuing tsunami of wealthy young professionals, as well as legions of “empty-nesters,” flowing into the urban cores. This led to a rash of high-end condominium developments. Yet in the end, the condo market turned out far less appealing than advertised, crashing virtually everywhere from Chicago and Las Vegas to Atlanta, Portland and Kansas City. This has left many investors with empty units, distress auctions or far less profitable rentals.

One hopes the development community might still learn something from that failure. But the Urban Land Institute among others increasingly maintain that vast new frontiers for new high-density growth will develop in the inner-ring suburbs. Yet in many areas with strong central cores, such as New York, Seattle and Chicago, inner suburbs usually grew slowly, particularly in comparison with the further out peripheral expanses.

Critically, the notion of mass suburban densification is likely to meet strong resistance from local residents. This will be particularly marked in attractive, affluent “progressive” areas like the Bay Area’s Marin County, Chicago’s North Shore suburbs and New York’s Hudson Valley. People who move to these places are attracted by their leafy, single-family-home-dominated neighborhoods and village-like shopping streets. Nothing short of economic catastrophe or government diktat would make them accept any intense program of densification.

Of course, some urbanists claim that the new millennial generation, born after 1983,  will prove “different” from all their predecessors. Yet research to date finds older millennials may prove more attracted to suburban living than many density advocates suggest. According to a survey  by Frank Magid and Associates, more millennials consider suburbs as their “ideal place” to settle than do  older groups.

As generational chroniclers Morley Winograd and Mike Hais have noted, the fact that most millennials plan to get married and have children only reinforces this trend over time. Another problem may prove that millennials may be running out of ideal urban options.  Back in the 1990s it was far easier to buy a home in one of the nation’s handful of really attractive cosmopolitan urban settings — for example,  brownstone Brooklyn, Northside Chicago, LA’s beach communities or San Francisco. Today these areas suffer some of the highest housing prices relative to incomes of any places in the country.

Rather than blindly accept the vision of a mass movement back to the urban centers, developers might focus instead on what kind of housing, and community, addresses the needs and affordability concerns of millennials as they move into full adulthood. Over the next ten years, the number of millennials entering their mid-30s will expand by over 40 million   – a population larger than those of elderly residents who will be old enough to give up their homes.

This large group is also most likely to continue moving to the lower-density, more affordable South and  West. These areas already boast disproportionate percentages of millennials, Hais and Winograd report.

It’s time for developers and planners to look more closely at how young adults as they enter their 30s vote with their feet. Unless there has been a mind-numbing change in attitude or an unexpected return to good governance in cities, young adults entering middle age will continue their shift toward suburban and lower-density areas in the decade ahead, upending the predictions of most pundits, planners and development experts.

INVITE JOEL TO SPEAK
A Most Undemocratic Recoverytrend reversal: young americans are choosing suburbs over cities
Scroll to top