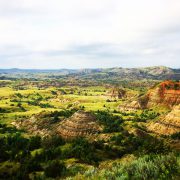 Oil and gas companies have the worst public image of any industry in the United States, according to Gallup. But it’s well-loved in a swathe of the U.S. from the northern Plains to the Gulf Coast, where the boom in unconventional energy production has transformed economies, enlivened cities and reversed negative demographic trends.

What now that the good times are over in the oil patch? In North Dakota, the epicenter of the once-hot Bakken shale play, the number of active rigs is down to 68 as of this week from 145 in June of 2014.

Some might argue that it’s now the turn of oil patch cities to suffer, just as they did when prices plunged back in the early 1980s, setting off a decade long decline. But many of these cities have made considerable progress in economic diversification, making themselves far more attractive places for non-energy businesses.

Perhaps no state benefited more from the energy boom than North Dakota. Long known more for its harsh weather, low population and featureless expanses than for anything positive, the massive deposits on the Bakken formation turned the state into the No. 2 energy producer in the country, trailing only Texas. The prairie state gained 45,000 energy jobs between 2007 and 2014. Now the decline in oil prices promises to eliminate quite a few of them.

But few North Dakotans seem to believe that the energy bust will turn the state once again into a poster child for stagnation. For one thing, North Dakota’s job base has also expanded well beyond oil, with a net growth of 155,000 jobs   jobs from 2007 to 2014  — no small beer in a state with a population of 739,000. This growth started well before the oil boom, with employment surging by 50,000 jobs between 2000 and 2007.

Transportation, logistics, wholesale trade and construction are among the industries that have added jobs, and the state’s technology industry has surged, doubling employment since 2009. The state’s engineer count has expanded 41% since 2009, almost seven times the national increase. Fargo, the state’s largest city but hundreds of miles from the Bakken, has thrived in large part due to the expansion in tech and business services. Overall Fargo has 38% more jobs than in 2000.

In the coming years, other industries may help pick up the slack from energy. One prime candidate is aerospace, where North Dakota is touting itself as the “Silicon Valley of drones,” an outgrowth of the conversion of the Grand Forks Airforce Base from launching bombers and tankers to drones. The country’s first drone-only business park is being built on an unused portion of the base. Other industries on the upswing include biomedicine and wind turbine parts.

Although some accounts have focused on the high costs to North Dakota communities of the oil boom, it’s difficult to find many North Dakotans who think it hasn’t been worth it. Over the past decade the state’s per capita income soared from 38th in the nation in 2004 to sixth in 2014. In this surge North Dakotans bought lots of things that once seemed unattainable, including winter homes in places like Phoenix.

Beyond The Buffalo Commons

But perhaps the biggest transition is demographic. A decade ago North Dakotans were being told by geographers like Rutgers’ Frank and Deborah Popper that their state would continue to lose residents and would best be transformed into a “buffalo commons,” a giant park that would be home largely to native Americans and the state’s varied wildlife .

Yet North Dakota has enjoyed a remarkable demographic revival. After stagnating at roughly 640,000 for 15 years between 1990 and 2005, the state’s population now stands at roughly 100,000 higher.

Once among the oldest states, it now ranks as the fourth youngest, with among the highest birthrates and the strongest in-migration per capita in the nation. More important still, the youngest residents are now much better educated, according to an analysis of Census data by Mark Schill of the Grand Forks-based Praxis Strategy group. Some 34% of North Dakotans between the ages of 25 and 34 have college degrees, and 40.8% in Fargo, well above the 31.7% rate nationally.

Critically much of the demographic recovery in North Dakota is concentrated in Fargo and other places far from the energy belt, such as Sioux Falls, Omaha and Des Moines.

Do The Plains Have A Future?

Clearly the drop in price of oil, as well as of some farm commodities, will slow the Plains’ progress. Some sectors, notably the coal industry, seem destined to shrink as the EPA clamps on tighter emissions controls. North Dakota’s now low energy costs could be undermined by such steps, eliminating one competitive advantage. Iowa, Kansas and Minnesota also rank among the states most reliant on coal for electricity.

The decline in key commodity markets could also hit the region’s resurgent manufacturing sector, which specializes in farming and earth-moving equipment; the current problems plaguing Caterpillar and are being felt across the region. The problems in key export markets, such as China and Canada, are being further exacerbated by the strong dollar.

But younger demographics and low business costs suggest that the state will remain attractive for tech and business services companies. The state’s ability to draw businesses from higher-cost coastal areas has been bolstered by strong on the ground improvements. In Fargo there has been substantial downtown development and it boasts cultural attractions and a lively restaurant scene. The same can be said for in many Plains cities, notably Oklahoma City, Des Moines and Omaha. Anyone who had visited these place a decade or two ago would likely barely recognize them.

To be sure with its tough climate and location far from the coasts, the Great Plains cities are not likely to challenge places like California or New York for leadership in media or software. But there’s an opportunity for these metro areas to grow in industries ranging from manufacturing and logistics to customer support that can sustain them until commodity prices once again begin to rise. When that happens, as they say out there, honey, bar the door.

This piece first appeared in Forbes.

Joel Kotkin is executive editor of NewGeography.com and Roger Hobbs Distinguished Fellow in Urban Studies at Chapman University, and a member of the editorial board of the Orange County Register. He is also executive director of the Houston-based Center for Opportunity Urbanism. His newest book, The New Class Conflict is now available at Amazon and Telos Press. He is also author of The City: A Global History and The Next Hundred Million: America in 2050. He lives in Orange County, CA.

Photo “Western North Dakota” by Aaronyoung777 – Own work. Licensed under CC BY 4.0 via Wikimedia Commons.

Environmental Activists Turn up the Rhetorical Heat
Scroll to top