You are here: Home1 / Articles2 / Demographics3 / The Changing Geography of Racial Opportunity 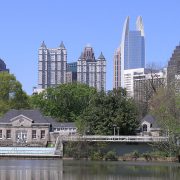 In the aftermath of the Baltimore riots, there is increased concern with issues of race and opportunity. Yet most of the discussion focuses on such things as police brutality, perceptions of racism and other issues that are dear to the hearts of today’s progressive chattering classes. Together they are creating what talk show host Tavis Smiley, writing in Time, has labeled “an American catastrophe.”

, including African-Americans, Latinos and Asians. In order to determine this, my colleague at Houston-based Center for Opportunity Urbanism Wendell Cox and I developed a ranking system that included four critical factors: migration patterns, home ownership, self-employment and income.

We found, for all three major minority groups,   that the best places were neither the most liberal in their attitudes nor had the most generous welfare programs. Instead they were located primarily in regions that have experienced broad-based economic growth, have low housing costs, and limited regulation. In other words, no matter how much people like Bill de Blasio talk about the commitment to racial and class justice, the realities on the ground turn out to be quite different than he might imagine.

Perhaps the greatest irony in our findings is the location of many of the best cities for minorities: the South. This is particularly true for African-Americans who once flocked to the North for both legal rights and opportunity. Today almost all the best cities for blacks are in the South, a region that has enjoyed steady growth and enjoys generally low costs. Indeed, of the top 15 cities for African-Americans, 13 are in the old Confederacy starting with top-ranked Atlanta, No. 2 Raleigh, No. 4 Charlotte, No. 6 Virginia Beach-Norfolk, No. 7 Orlando, No. 8 Richmond (a distinction it shares with Miami and San Antonio), as well as   four of Texas’ large metro areas: No. 12 Houston, No. 13 Dallas-Ft. Worth and No. 8 San Antonio. The only two other metros are “inside the Beltway”: the metropolitan expanses of Washington and, surprisingly, Baltimore.

What accounts for this? Well, in Washington and Baltimore, the obvious answer is the federal government.  Roughly one in five black adults works for the government, and are far more likely to have a public sector job than non-Hispanic whites, and twice as likely as Hispanics. These are not the people who rioted in the inner city; most of them live in prosperous suburbs surrounding these cities. But outside the Beltway region, the explanations tend towards more basic economics, like job creation, low housing prices and better opportunities for starting businesses.

Ironically, blacks – 6 million of whom moved to the North during the great migration — are once again voting with their feet, but back to the same region in which, for so long, they were so harshly oppressed.   Between 2000 and 2013, the African-American population of Atlanta, Charlotte, Orlando, Houston, Dallas-Fort Worth, Raleigh, Tampa-St. Petersburg and San Antonio all experienced growth of close to 40 percent or higher, well above the average of 27 percent for the nation’s 52 metropolitan areas with more than 1 million residents.

In contrast, the African-American population actually dropped in five critically important large metros that once were beacons for black progress: San Francisco-Oakland, San Jose, Los Angeles, Chicago and Detroit.  In many cases, most notably in San Francisco, blacks have become the unintended victims of soaring housing prices and rampant gentrification, with little option to move to the also high-priced suburbs.   Today, suggests economist Thomas Sowell, the black population of the city itself is half that of 1970; the situation has changed so much that former Mayor Gavin Newsom even initiated a task force to address black out-migration.

Yet if many African-Americans can be seen “going home” to their native region, the South is also doing well among ethnic groups that have historically had little attachment to Dixie. For Latinos, now the nation’s largest ethnic minority, seven of the top 13 places are held by cities wholly or partially in the old Confederacy, led by No. 1 Jacksonville, Fla., as well as No. 4 Houston, No. 6 Virginia Beach, No. 7 Dallas-Ft. Worth, No. 9 Austin, No. 12 Tampa and #13 Orlando.The majority of newcomers to the South, notes a recent Pew study, are classic first-wave immigrants: young, 57 percent foreign-born and not well educated — but they see the South as their land of opportunity.

In Florida, no stranger to Latino populations, Tampa-St. Petersburg, Orlando and Jacksonville all experienced Hispanic growth rates since 2000 between 100 and 150 percent, well above the average of 96 percent among the 52 metropolitan regions.  Lower housing costs and better prospects for advancement drive this change.  Despite their historically large populations in Texas, Latino populations still grew at a rapid rate in Houston, at 68 percent, Dallas-Ft. Worth at 70 percent and Austin, 83 percent.  “You go where the opportunities are,” explains Mark Hugo Lopez, associate director of the Pew Hispanic Center in Washington, D.C.

Asian-Americans, although their economic and educational performance tends to be better than other minorities, follow a surprisingly similar pattern. Seven of the top 10 regions for them also were in the South, as well as two others, Washington and Baltimore, that abut the old Confederacy. Most of the best metros for Asians were in the Sunbelt, starting with No.1 Riverside-San Bernardino, Calif., No. 2 Richmond, No. 4 Raleigh, No. 5 Houston,   No. 7 Dallas-Ft. Worth, No. 8 Austin, No. 9 Las Vegas, No. 12 Phoenix, No. 13 Atlanta and No. 15 Jacksonville.

Like African-Americans and Latinos, Asians are voting for these places with their feet. Although Asian migration still is largely to California, that’s not where Asians are increasingly moving. Since 2000, Asian population growth in their traditional hubs like Los Angeles, San Francisco and San Jose was roughly one-third what was seen in the top Asian cities.

The New Geography of Racial Opportunity

Perhaps the biggest determinant of immigrant and minority opportunity has to do with home ownership. In the aftermath of the housing crash, minorities, notably blacks and Hispanics, suffered tremendous losses. This exacerbated the largest cause of the wealth gap  between minorities and whites: the extent of homeownership, which represents the key asset class for most Americans.

Whereas older whites may have been able to benefit from wildly inflated home values, the results for minorities, who are generally younger and newer to the market, are less satisfactory. One useful comparison can be drawn between two adjacent metropolitan regions, Los Angeles and Riverside-San Bernardino. House prices in Los Angeles are roughly twice as high, based on income; not surprisingly, minority home ownership is much lower there. Black homeownership in Riverside-San Bernardino (an area known as the Inland Empire) is over 40 percent, 10 points higher than in L.A.; for Asians it is 14 percent higher, and for Latinos the percentage difference with L.A.  is more than 20 points.

Some of the worst results — in terms not only homeownership but income — are ironically in those part of the country that purport to be most sympathetic to minority interests. In New York, Los Angeles and San Francisco, between 25 and 30 percent of African-Americans own their own home. In Atlanta it’s nearly 50 percent and well over 40 percent in most of the other Dixie metro areas.

This is not likely to change soon. Black incomes in these Southern cities, where there is a much lower cost of living, are roughly the same as they are in super-blue New York, Los Angeles, Boston or San Francisco.  Much the same pattern can be seen for both Latinos and Asians, with the exception of San Jose, where Silicon Valley employment keeps their household income well north of $100,000 annually.

What this study shows us is, if nothing else, the relative worthlessness of good intentions. As we have seen over the past 50 years, the expansion of transfer payments, while critical to alleviating the worst impacts of poverty, have not generally been best at promoting upward mobility for African-Americans and, increasingly, Latinos. If higher welfare costs and political pronunciamentos were currency, New York, Los Angeles, Boston and San Francisco would not be, for the most part, stuck in the second half of our rankings.

Ultimately what really matters are the economics of opportunity. Many of the cities that scored best for all three groups — the Washington, D.C. area, Houston, Dallas-Fort Worth, San Antonio and Austin — have enjoyed stronger than normal economic growth over the past decade.  In the areas around the nation’s capital, government employment has been a critical factor; in the other areas more generalized business growth has taken the lead.  In contrast, notes University of Washington demographer Richard Morrill , many regions that have seen rapid de-industrialization and slow housing growth have developed “barbell” economies based on a combination of ultra-high-wage industries, like technology and finance, and low-end service jobs.

There are other policy implications. Blue state progressives are often the most vocal about expanding opportunities for minority homeownership but generally support land use and regulatory policies, notably in California, that tend to raise prices far above the ability of newcomers — immigrants, minorities, young people — to pay. Similarly blue state support for such things as strict climate change regulation tends to discourage the growth of industries such as manufacturing, logistics and home construction that have long been gateways for minority success.

Given the persistence of racial tensions, this data begins to give us a clearer understanding of what actually works for America’s emerging non-white majority. Denunciations of racism, police brutality and xenophobia may be all well and good for one’s sense of justice. But  if you want actually to improve the lives of minorities, we might consider focusing instead on policies that promote economic opportunity, keep living costs down, and allow for all Americans to enjoy fully the bounty of this country.

INVITE JOEL TO SPEAK
Best Cities for Minorities: Gauging the Economics of Opportunity

The Best Cities For Jobs 2015
Scroll to top