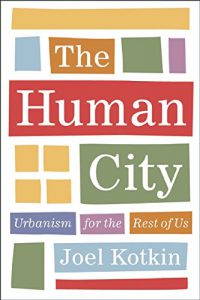 Around the globe, most new urban development has adhered to similar tenets: tall structures, small units, and high density. The Human City questions these nearly ubiquitous practices, suggesting that they do not consider the needs and desires of the vast majority of people. In fact, exclusively dense urban development, the book suggests, might be doing more harm to future generations than good.

In this book, Joel Kotkin argues that in order to be truly sustainable, built environments must reflect the preferences of most people—and families in particular—even if that means encouraging an urbanist’s worst nightmare: lower-density, suburban development. This approach also could include residential neighborhoods within big cities as well as smaller towns.

Kotkin begins by pondering the purpose of the city and investigating the factors that drive most urban development today. Armed with his own astute research, a deep-seated knowledge of urban history, and sound grasp of economic, political, and social trends, Kotkin pokes holes in what he calls the “retro-urbanist” ideology and offers a refreshing case for dispersion centered on human values. The Human City calls for diverse options to meet the changing needs of people in the different stages of their lives.

To make his argument, Kotkin examines the good, the bad, and the ugly of high-density environments, including the megacities of the developing world and the “glamour zones” of global metropolises. The book itself has its origins in research conducted by the author in Singapore, arguably the best run of all dense cities. He also explores the thriving small cities, revitalized neighborhoods, and vibrant suburban developments that are already providing lower-density  alternatives to centralized, “pack-and-stack” living. Direct, accessible, and thoroughly researched, The Human City reminds us that we are not just the products of demographic and economic forces, but that we can also shape the future we wish to inhabit.

Reviews for ‘The Human City’

Between 1840 and 1910, the population of Manhattan grew sevenfold, reaching a peak of 2.3 million in 1910. The average population density of its built-up areas tripled during this period. The New York Times in 1898 spoke of “densely crowded quarters” and “inmates . . . huddled together in their cramped hutches like rabbits.” How cramped? There were 620 people per acre, on average, in the walk-up tenements of the Lower East Side and 540 people per acre, on average, in the East Village. Jacob Riis, the author of “How the Other Half Lives,” placed the blame for overcrowding on the shortage of “decent” residential buildings in Manhattan: “We have a tremendous, ever swelling crowd of wage-earners which it is our business to house decently; . . . it is not housed decently; . . . it must be so housed here for the present, and for a long time to come, all schemes of suburban relief being as yet utopian, impracticable.”

Nearly a century ago, in 1920, the Census Bureau caused a ruckus when it announced that for the first time a majority of Americans lived in cities — even though its definition of a city included every hamlet with a population of 2,500 and above.

Today a majority of Americans live in what are by any reasonable definition very large cities, metropolitan areas with populations above 1 million. But the urban planning profession remains fixated on just one small portion of these metropolises, the central city downtowns, though none outside New York contains more than 10 percent of metropolitan area jobs.

That’s one of the lessons of Joel Kotkin’s new book The Human City, which takes a wider and longer view. Kotkin shows how cities developed as religious, imperial, commercial and industrial centers.

[The] kinds of places that are getting it right . . . we might call Joel Kotkin cities, after the writer who champions them. These are opportunity cities . . . [that] are less regulated, so it’s easier to start a business. They are sprawling with easy, hodgepodge housing construction, so the cost of living is low. . . . We should be having a debate between the Kotkin model and the [Richard] Florida model, between two successful ways to create posterity.

Whether you’re a downtown dweller or suburbanite, renter or owner, there is plenty of urban food for thought in The Human City.

Joel Kotkin makes the argument that we need densification downtown and dispersion on our suburban edges if we want continued economic growth.

Kotkin’s unlikely to be invited to talk to a banquet hall full of Hamilton urbanists. Yet he makes a convincing case for why doubling down on densification while restricting dispersion in suburbia is a bad idea.

“No field of study — technical or in the humanities — thrives when only one side or perspective is allowed free reign (sic) and granted a dispensation from criticism. The question of the future of cities is too important to be hemmed in by dogma and should instead invite vigorous debate and discussion.

The most eloquent expression of urbanism since Jane Jacobs’s The Death and Life of Great American Cities. Kotkin writes with a strong sense of place; he recognizes that the geography and traditions of a city create the contours of its urbanity.

[Kotkin] believes it’s time to start rethinking what suburbia can be and to become more strategic about how it evolves.

Kotkin is one of the clearest urban writers and thinkers of our time. His first-hand experiences and insights on a broad array of issues such as inequity, infertility, lifestyle, and urban design shake the reader like a jolt of urban caffeine.

California Leaders Double Down on Dry