You are here: Home1 / Articles2 / Demographics3 / Why Social Justice is Killing Synagogues and Churches 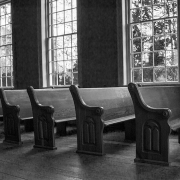 “If it turns out that there is a God … the worst that you can say about him is that basically he’s an underachiever.” —Woody Allen

If you go into a Reform or Conservative temple, it’s likely that you will notice two things: The congregation is becoming smaller and older. Across the United States and Europe, Jewish congregations are aging at a rapid rate, a phenomenon increasingly common for mainstream religions across the high-income world.

Overall, the American Jewish population—unlike that of demographically robust Israel—is on the decline, with a loss of 300,000 members over the past decade, a number expected to drop further by 2050. The median age of members of Reform congregations is 54, and only 17 percent of members say they attend religious services even once a month. Four-fifths of the movement’s youth are gone by the time they graduate high school. The conservative movement is, if anything, in even worse shape: At its height, in 1965, the Conservative movement had 800 affiliated synagogues throughout the United States and Canada; by 2015 that number had fallen to 594.

But Jews, and their religious institutions, should not feel singled out. The share of Americans who belong to the Catholic Church has declined from 24 percent in 2007 to 21 percent in 2014, a more rapid decline according to Pew, then any other religious organization in memory. There are 6.5 former Catholics in the U.S. for every new convert to the faith, not a number suggesting a very sunny future.

The mainstream Protestant churches are not exactly filling the sanctuaries either. Some, like the internally conflicted Methodists have seen their number of North American congregants drop from 15 million in 1970 to barely half that today. Since 2007 alone, America’s mainstream churches have lost 5 million members, and even the once vibrant evangelical movement is losing adherents outside of the developing world. Ever more churches, particularly in urban areas, are being abandoned, turned into bars, restaurants, and luxury condos. And nothing augurs worse for the future than the fact that American millennials are leaving religious institutions at a rate four times that of their counterparts three decades ago; almost 40 percent of people 18 to 29 are not unaffiliated.

This decline is not necessarily a reflection of less spiritual feeling: Two-thirds of unaffiliated Americans still believe in God or a universal spirit. The Pew poll shows that since 2012, the share of Americans who describe themselves as “spiritual but not religious” has surged from 19 percent to 27 percent five years later.

Why, then, the decline in religion? For one thing, young Americans have different habits. Rather than join institutions, millennials, argued Wade Clark Roof, author of the book Spiritual Marketplace, are indulging in a kind of “grazing,” finding their spiritual fixes in various different places rather than any one organized church. As sociologists Robert Putnam and David Campbell explained, those in this age group “reject conventional religious affiliation, while not entirely giving up their religious feelings.”

But the consumption habits of the young aren’t the only reason for America’s religious drought. Religious institutions and ideas are currently under political attack, predominantly from the left, with some progressives, such as California’s Dianne Feinstein or New Jersey’s Cory Booker, appearing to see embrace of Christian dogma, or even membership in such anodyne organizations as the Knights of Columbus, as cause for exclusion from high judicial office.

This trend is reinforced by the media, which is often dismissive of traditional faith. There has been a powerful tendency to demonize and suggest the worst of motives among the faithful, which was evident in the rush to judgment about the alleged racism of the Covington, Kentucky, religious students. Before the facts proved claims of racism to be false, newspaper accounts and tweets from journalists endorsed actions against the students, sometime including violence, in ways more reminiscent of Joseph Goebbels than Joseph Pulitzer.

As in many cases, this bias reflects the groupthink nurtured at our leading universities. Evangelicals and religious conservatives barely exist in the country’s leading theological seminaries, where they are outnumbered, by some estimates, 70 to 1 by liberals, and evidence suggests that those espousing traditional religious views are widely discriminated against in academic departments.

In this difficult environment, many religious movements—Reform Judaism, mainstream Protestantism, and increasingly the Catholic Church under Pope Francis—have sought to redefine themselves largely as instruments of social justice. Although doing good deeds, or mitzvot, long has constituted a strong element in most religions, the primary motivation of the faith community traditionally focused on heritage, spirituality, and family. In their haste to be politically correct, even Catholic private schools such as Notre Dame are rushing to cover up murals of Columbus, and, in one California case, a private Catholic grammar school has gone as far as hiding statues of saints.

Yet rebranding themselves as progressive often brings religious activists into alliances with people who reject their core values. The Catholic left, for example, allying itself with the progressive wing of the Democratic Party, implicitly embraces the advocates of the most extreme abortion liberalization. Sometimes, these linkages are ironic: Faith in Public Life, for example, a strident “religious” group advocating a progressive anti-Trump line, gets much of its funding from George Soros, arguably the world’s most well-heeled and active promoter of atheism.

For their part, progressive Jews, embracing the notion of tikkun olam, face a similar dilemma. In their rush to oppose President Trump, with his occasional despicable winks at alt-right groups, many Jewish activists have collaborated with the organizers of the Women’s March, including enthusiastic backers of the most influential anti-Semite of our time, Nation of Islam head Louis Farrakhan.

Deep blue cities and the progressive feeding lots of the academy—strongholds of progressivism—are precisely where support for such anti-Jewish measures as the BDS movement is strongest. Anti-Semitism is particularly rife not in conservative Southern schools but in progressive places like San Francisco State; in that city, the ultimate progressive stronghold, a leftist gay Jewish café owner recently has been subject to repeated protests for being a “Zionist gentrifier.”

This alliance with anti-Semites and those opposing the existence of the state of Israel pushes the limits of cognitive dissonance. Jews in the U.K. are confronted with Labour leader Jeremy Corbyn, who defends not only anti-Zionist but also traditional anti-Semitic tropes. Recently progressive heartthrob Alexandria Ocasio-Cortez, herself an adopter of anti-Israel memes about Gaza and other occupied areas, gushed over her recent “lovely and wide-reaching” conversation with Corbyn, the West’s most politically prominent Judeophobe.

Indeed, despite the impression left by some progressive Jews, the largest threat to Jews in America stems not from the isolated and pathetically small lunatic fringe of white supremacists. The most anti-Israel members of Congress, as well as on the local level, come primarily not from the right wing of the GOP but the burgeoning left wing of the Democratic Party. Democratic voters—as well as key constituencies like minorities and millennials—poll consistently less sympathetic to both Jews and Israel than older, generally white Republicans.

Is there a way back from this sorry state of affairs?

However satisfying to its practitioners, the emphasis on social justice is clearly not attracting more worshippers. Almost all the religious institutions most committed to this course are also in the most serious decline, most notably mainstream Protestants but also, Catholics and Reform and Conservative Jews. The rapidly declining Church of England, which is down to 2 percent share among British youth, is burnishing its progressive image by adding the use of plastics to its list of Lenten sacrifices, but seems unable to serve the basic spiritual and family needs of their congregants.

In contrast, more conservative faith organizations generally enjoy better growth, and higher birthrates, particularly in the developing world . The University of London’s Eric Kaufmann explains in his important book Shall the Religious Inherit the Earth? that if current trends continue, the more fundamentalist family-centered faiths seem most likely to survive. Already, for example, Orthodox Jews, historically a small subgroup, are projected to become the majority of the Hebraic community in Britain by 2100, and already constitute some three-fifths of Jewish children in New York.

Orthodox Jews and evangelicals may be finding common ground, then, but the future of religion overall does not seem a bright one. It’s hard to imagine most young Jews becoming Orthodox, or casual Christians embracing en masse Mormonism or evangelical Christianity. Instead, the future seems to point to a smaller, more conservative religious community, isolated amidst an increasingly secularized culture.

To survive, less traditionalist faiths need less “virtue signaling” and more emphasis on serving the needs of congregants. Marshall Toplansky, who advises Church World Services, a major Protestant aid group, suggested that groups like Mormons and evangelicals who focus on providing services for families and their local communities fare far better than those more tied to strictly a social gospel. Toplansky said that many mainstream churches “have overlooked the value of building grassroots relationships with their donors,” who sometimes do not share the progressive ideology of the clerical class. Without engaging the faithful and addressing their needs, he noted, “people stop identifying with their local institution and stop participating in the local activities that defined them to begin with.”

Catholicism, now under a reforming and politically progressive pope, faces a similar challenge. It is losing adherents, not only in North America and Europe, where his views are popular, but also his homeland of South America, where the church is steadily losing out to more conservative evangelical churches. Until the 1960s, at least 90 percent of Latin America’s population was Catholic, but that number has fallen to under 70 percent. Today, roughly 1 in 4 Nicaraguans, 1 in 5 Brazilians and 1 in 7 Venezuelans are former Catholics. The one place where the church is growing most, Africa, is dominated by conservative bishops often at odds with Francis.

Anthony Lemus, an influential lay Catholic, believes the church’s future relies on remaining true to its principles while refashioning its message to serve its adherents’ worldly, as well as spiritual, needs. An astrophysicist brought up in a deeply Catholic East Los Angeles household, Lemus is working with a prominent Catholic theologian, Rev. Robert Spitzer, on rewriting of the Catholic Catechism to make the faith more accessible to the new generation. He also supports efforts to improve services from the church—day care, athletic clubs, camps—that might attract young families back to the faith.

“Today’s generation is more in tune with value-add products and services influencing their lives immediately, and the relevance of faith competes with these promotions,” he said. “A ‘sticky’ rebranding of the importance of faith formation’s value in everyday life is key to reposition its importance for living a holistic life.”

Ultimately, as Lemus suggested, religions, including Judaism, can only hope to thrive if they serve a purpose that is not met elsewhere in society. It is all well and good to perform good deeds, but if religions do not make themselves indispensable to families, their future could be bleak. As we already see in Europe, churches and synagogues could become ever more like pagan temples, vestiges of the past and attractions for the curious, profoundly clueless about the passion and commitment that created them.

This article first appeared on Tablet.

INVITE JOEL TO SPEAK
Where Millennials Really Go For Jobs

The Imperial Presidency
Scroll to top