You are here: Home1 / Articles2 / Urban Affairs3 / Three Things Trump is Getting Right and Democrats Ignored 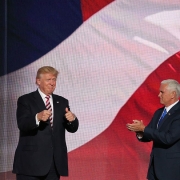 Right on cue, the country’s dominant political and media voices, after wildly applauding Joe Biden and Kamala Harris, have responded to Donald Trump’s week in the spotlight with laughter, derision and anger for its supposed amateurism, lack of star power, and racism.

And the convention has given critics plenty to laugh at, or cry if you are a Republican. The use of the gun-wielding wealthy St. Louis couple was a strange way to address the Democrats’ very real plans for undermining the nation’s suburbs. Placing the utterly clueless and unsympathetic Donald Trump Jr. on the podium, while elevating the Trump family over the party faithful, revealed a serious cognitive shortcoming worthy of the Bourbons.

But the smart set said the same sorts of things about a “branding disaster” after the 2016 Republican convention, and we know how that turned out. Given the weak economy, the ham-handed response to COVID-19 and the miserable persona that is Donald Trump, four years later this election should be in the Democrats’ bag. But there are three big things that Trump is getting right, and Democrats are mostly just ignoring, that explain why the smart money in Vegas sees Trump’s odds of winning going up.

Don’t Fool Yourself, Libs. Trump’s Show Is a Yuge Success.

Start with China and Russia. “They had learned nothing, and forgotten nothing,” Talleyrand once said of the Bourbons, who incompetently sought to run France after the Revolution. Like the French royal family, Democrats cannot stop pushing memes about Trump’s alleged collusion with Russia, never proven by the interminable Mueller investigation. The Trumpists were stupid, inexperienced, and ham-handed, but a successful conspiracy takes discipline, intelligence, and cunning.

And in focusing on Russia in their resistance-fuelled excitement about the prospect of taking down Trump, Democrats lost focus on China. Russia, to be sure, is a nuclear-armed annoyance but it is hardly the economic or ideological threat posed by China. Russia’s GDP is smaller than South Korea’s or even California and barely a tenth of China’s, and less than one-fifteenth of the United States’. China’s economy still trails the U.S., but is steadily catching up. It’s our only real competitor.

Russia may threaten its weak Eastern European neighbors but China has imposed its will over one of the world’s great cities, Hong Kong, and is expanding its naval presence to threaten the robust economics of East Asia. One reason for Democrats’ relative passivity and silence here is that China’s autocracy has enriched many of our most “progressive” companies—notably Apple and Nike—while costing an estimated 3.4 million American jobs since its inclusion in the World Trade Organization in 2001. Yet Joe Biden, whose own family has had close business ties with Beijing, has minimized the Chinese threat to our economy, claiming, incredibly, as recently as last year that “you know, they’re not bad folks, folks. But guess what? They’re not competition for us.”

At the Democratic convention, which drew 23 percent less viewers than four years ago, we were treated to a parade of current and former mayors, including Michael Bloomberg, Cory Booker, Keisha Lance Bottoms, and Eric Garcetti. Urban centers long ago replaced “the solid South” as the Democratic base, although the re-embrace of segregation at places like NYU does bring back a bizarre déjà vu. In places like New York and San Francisco, Republican presidential candidates now fail to win one-fifth or sometimes even one-tenth of the vote.

Yet building a party around urban voters at a time when many cities are losing population and facing constant unrest, along with huge budget holes, seems precarious. The country’s three biggest core cities—New York, Los Angeles and Chicago—are all losing population. Overall, the urban core counties of major metropolitan areas have lost a net 1.8 million people since 2010, mainly to lower-density counties where single-family houses dominate. Since 2012, suburbs and exurbs have accounted for about 90 percent of all metropolitan growth nationwide.

How many suburbanites, whatever their color, are really in the current climate going to embrace schemes that will bring density, and loads of troubled people, to their communities? Millennials, a key Democratic constituency, were already ditching big cities before the pandemic, notes Brookings. Since the pandemic, new buyers, mainly millennials, have been even hungrier for more space. Like their parents, their home preferences are for the spread-out suburbs that many progressives regularly denounced as racist and unecological.

With rolling protests in urban areas perpetually threatening to ignite, including in small cities like Kenosha, Democrats still insist that the American future should be predominantly urban. But how many people really see the antifa colony of Portland, once the apple of many an urbanista’s eye, as their American Dream? Democrats got an undeserved pass there when the feds came in after weeks of increasingly violent and disruptive protests, but with the feds largely gone, the protests have continued unabated—undermining the anti-Trump spin of the dominant resistance media. The continued chaos in other cities, such as Chicago, Seattle, and Minneapolis, is no great advertisement for making the urban future America’s idyll.

Podcast Episode 9: How COVID is Shaping the Office of the Future
Scroll to top