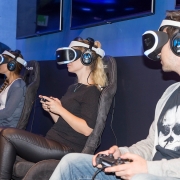 In a society that seems addicted to the “new, new thing,” it is easy to pass off talk about the “metaverse” as classic techie hype. It’s not that or, at least, it’s about to be and is already becoming much more than just that.

There’s a reason that tech oligarchs are betting their futures on this technology to extend the internet into a permanent virtual reality, one with the potential to consume everything in its path and remake societies. Mark Zuckerberg may be a menace but he is willing to ignore critics and seize the future. In renaming Facebook as Meta, he absorbed a $200 billion loss in market value for the company and a $30 billion drop in his own net worth.

He’s hardly alone in being willing to take the risk. Rony Abovitz, a confidant of Zuckerberg , received more than $2.5 billion in funding from a diverse list of venture and private equity investors, including Alibaba and Google, for his previous virtual reality venture, Magic Leap. Former Disney CEO Robert Iger is also taking the plunge, taking a seat on the board of Los Angeles-based Genies, which has raised $100 million in venture funding to create avatars for celebrities on the Metaverse as well for the sale of virtual “goods.” Disney itself has a senior VP dedicated to its metaverse strategy, a former CTO at the entertainment giant with “a history of enabling transformation… Especially when it comes to bridging the physical and digital worlds.”

Abovitz compares the current discovery of what he calls “inner space”—a blending of “neuroscience, imagination, consciousness, physics, and adventure”—to the space pioneers of the Mercury program. Matthew Ball, the CEO of Venture Capital firm Epyllion, told Bloomberg that he anticipates the metaverse economy producing $10 to $30 trillion in 15 years.

The idea of a “metaverse” began in 2003 with Second Life, a game and marketplace that former Linden Lab CEO Philip Rosedale envisioned as a limitless, immersive “green field” where avatars interacted with other avatars, creating buildings and communities together and building a virtual economy. In practice, it seemed (and still seems) cartoonish and artificial, a “place” where people buy and sell virtual goods and virtual real estate with little consumer protection. That said, as of this writing, over 900,000 people still “play” Second Life, which was acquired by an investment group led by Randy Waterfield and Brad Oberwager.

As to the cartoonish and artificial feel, including in Zuckerberg’s introduction of Meta’s metaverse, of these worlds, that’s something that can change quickly with technological progress, whose breakneck pace was further accelerated by the online impact of the pandemic, allowing for major advancements in vividity, or the “real-seemingness” of these virtual environments. Two technologies in particular, sensory field computing and artificial intelligence, can help make users feel like what they are experiencing is real. Sensory Field Computing refers to the way in which computers translate the five senses (sight, sound, touch, taste, and smell) into digital reality. The intended effect, explains virtual reality pioneer Charlie Fink, who teaches at Chapman’s Dodge Film School, is to create an “internet that you are inside of looking out at” rather than observing from a screen.

The invention of virtual reality goggles like Oculus, later acquired by Facebook (now Meta), was one big step forward for the sight and sound elements, albeit an insufficient one. But, according to Abovitz, founder of Mako Surgical, Magic Leap, and now Sun and Thunder, we are moving toward what he calls Neurologically True Reality, where all five senses can be represented so vividly that one’s neurons cannot tell the difference between physical reality and digital reality. He believes that this technology offers the potential to help severely traumatized people, such as those suffering from PTSD, recover by “rewiring” their brains to adapt to a different, non-traumatic reality. The sufferer can replace their old, disruptive world with a completely new view and context to lead a more normal life.

Feudal Future Podcast – The Impact of the Metaverse, Part 2
Scroll to top