You are here: Home1 / Articles2 / California3 / The Killing of Kern County 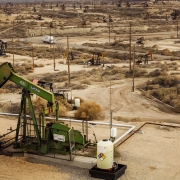 Located over the mountains from Los Angeles, Kern County has always been a different kind of place. Settled largely by “Okies and Arkies” from the Depression-era South, the area has a culture more southern than northern, more Ozarks than Sierra. Home to just under 1 million people at the southern end of the state’s Central Valley, Kern is noted for producing the “Bakersfield sound,” epitomized by the late country star Merle Haggard, and is sometimes even referred to as “little Texas.”

Although these may seem like “old economy” jobs, the Kern area has easily outperformed zippy “new economy” places in total job growth; outside of the Silicon Valley, notes Chapman analyst Marshall Toplansky, Kern is one of few California areas producing mid-wage jobs above the national average – far more than San Francisco, Los Angeles, and Orange Counties, which have fallen behind the national pace.

In recent years, the area – which even Kern Economic Development CEO Richard Chapman admits has a “Rodney Dangerfield problem” – also has emerged as a magnet for new migrants, even as California continues to lose people at an accelerating rate. Much of this has to do with lower housing prices. Kern is the only California region named by the National Association of Realtors among the ten most popular destinations for millennials.

In a state suffering from high housing prices and a lack of middle-wage jobs, one would think boosting Kern County and its largest city, Bakersfield (population: 700,000) would be a priority. Governor Gavin Newsom boasts that he wants to look for ways of “unlocking the enormous potential” of the Central Valley, but he seems more interested in flattening the area’s aspirations.

Climate policy sits at the core of this assault. Reflecting the prejudicial neuroses of his Bay Area and oligarchic base, Governor Newsom – who Dan Walters describes as “California’s champion virtue signaler” – has announced plans to shut down the state’s oil industry. Newsom’s latest unlegislated decree directed state regulators to ban all forms of oil and gas well stimulation technologies, including steam injection, essential for oil and gas extraction in the state. The draft rules, issued last month, would effectively sharply limit California’s oil and gas industry as well as future exploration and development. According to a study by the Los Angeles Economic Development Corporation, these dictates threaten over 366,000 high-paying, largely blue-collar jobs, about half held by people of color. Another 3.9 million jobs, 16.5% of total state employment, are at risk from these policies.

Read the rest of this piece on Real Clear Energy.

Photo: Bureau of Land Management via Flickr under Public Domain.

INVITE JOEL TO SPEAK
Joel Kotkin talks with Rod Arquette About How the Pandemic Changes Workplac...

Feudal Future Podcast – Madness in the Ruling Class: Who is Leading Our C...
Scroll to top