You are here: Home1 / Articles2 / Politics3 / So Much for Localism 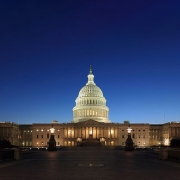 In the months that followed President Trump’s election, many thoughtful Democrats and progressives re-discovered the beauties of federalism.

After all, with a brute in the White House, maybe the best thing to do was to devolve power to the local level, notably in urban centers where Trump is about as popular as the bubonic plague.

The localist mantra was embraced by both the conservative American Enterprise institute and liberal Brookings. Cheerleaders for Barack Obama’s imperial presidency, such as The New Yorker, now started embracing states’ rights with an almost Confederate enthusiasm.

But once the Democrats won back the House, and began to smell blood for 2020, localism seems to have been all but forgotten. The Democratic debates have revealed instead an almost giddy desire to centralize ever more power in Washington. Kamala Harris wants to have Washington give teachers everywhere federally funded five-figure raises. Bernie Sanders and Elizabeth Warren want all medical care centralized into a giant Washington bureaucracy. Beto O’Rourke and Julian Castro have advocated turning local planning and zoning over the D.C. bureaucrats.

And then there’s the Green New Deal, embraced by most leading candidates. The GND, as its author, Saikat Chakrabartik, suggests, is not primarily a method for addressing the real issues around climate, but a “change-the-entire-economy thing” along socialist, centralized lines.

The short-lived liberal embrace of localism

This turn from localism could cost the Democrats, once people become aware that they support the micromanagement of their communities by ever more distant, and insulate, bureaucrats. Some of progressivism’s best minds, including Brookings’ Bruce Katz, long-time Washington liberal light, and urban pundit Richard Florida, the originator of the “creative class,” laid claim to the issue and understand that America is a very diverse country; what works in Brooklyn does not necessarily work in Dallas.

On the surface the notion of embracing localism, traditionally a conservative lodestone, has enormous appeal with the electorate. By a wide margin — 64 percent to 26 percent, according to a 2015 poll — Americans say that they feel “more progress” comes from the local level than the federal level. Majorities of all political affiliations and all demographic groups hold this same opinion. Local governments, according to another 2015 survey, are thought to be particularly better at economic development, and at improving neighborhoods and education.

Winograd explains the loss of enthusiasm for localism in the 2020 campaign as less a product of shifting public opinion than the natural result of running for president, which requires pandering to constituencies with promises of manna from Washington. “It’s why surgeons recommend surgery to cure you, or as the saying goes, why ‘When the only tool you have is a hammer, every problem looks like a nail,’” he notes.

Abandoned by both parties

This is hardly just the failure of the Democrats. Leaders of both parties have sat by while the forces of capital and government have centralized power and authority in ever fewer hands. Historically conservatives have favored local control. But when in power, they also have shown an unfortunate tendency to act with the centralizing zeal of Soviet apparatchiks.

In states like Texas and North Carolina, right-wing legislators have expanded state powers in order to limit political heterodoxy on both environmental and cultural issues. As analyst Aaron Renn points out, these assaults on local control are carried out by conservative legislators seeking to contravene the progressive agenda of core cities; in blue states, progressive-dominated state governments frequently seek to override more conservative local governments.

Certainly, we can’t expect much help from President Trump, who has made a point of interfering with states laws, notably those proffered by California, such as on auto emissions, water quality and other environmental standards. These laws may indeed be excessive, but the purpose of federalism is to allow for experimentation, even if it sometimes seems ludicrous. The results of our state’s green obsessions, such as the housing crisis and the loss of middle-class jobs, are plain to other states, and that should inform their own decisions.

Trump should be able to make the case that our progressive obsessions are disastrous, as he did recently with the homelessness issue, without trying to make himself the state’s overlord. Yet his authoritarian brand of Republicanism is helping persuade more Republicans, notes Pew, to favor an expanded federal role and ever-greater presidential power over the other branches of government.

Like Obama, Trump seems willing to supersede local control that violates his world view. Unlike Obama, who at least knew the Constitution, he seems utterly ignorant of any limits to federal, and specifically executive, power. His authoritarian streak may, in effect, be no worse that Obama’s “pen-and-phone” approach to issuing federal diktats, but certainly has not lend credence to the localist cause.

Yet what we see on the campaign trail, and in the pronunciamentos of President Trump, may not tell the whole story. Winograd and Ross feel localism’s appeal may be greater than immediately over time. They point to some statements by younger candidates including South Bend Mayor Pete Buttigieg, who has challenged some of the ultra-centralist prescriptions of Sanders and Warren, notably on health care.

Over time localism could still prevail, because it works. It’s clear that trying to solve things in Washington, which seems stuck in a binary system that increasingly pits socialist centralization against a regime of unbridled capitalist acquisition, is a hopeless task. In contrast, governors such as Democrat Gretchen Whitmer in Michigan, and Republicans Larry Hogan in Maryland and Charlie Baker in Massachusetts, focus more on basics like infrastructure and improving education, issues of concern to voters, not zealots and lobbyists.

One apparent perquisite for a shift to localism is political pluralism. In states where the right rules, such as Alabama, or the left, like New York and California, only one approach is allowed, and local concerns, whether economic or social, are channeled into an often unwanted, pre-ordained political script. Successful local government requires that differing interests and parties sit down together to hammer out solutions. When the various “freedom” caucuses or progressive activists set the agenda, practical approaches are thrown out in favor of ideological concerns.

It would be even better if local citizens, churches and nonprofits take on the problems themselves. For a half century we have witnessed an array of federal failures from housing and education to expanding economic opportunity. Trump and his prospective opponents may seek to repeat these failures; it is up to citizens, acting in the best interests of their families and communities, to say enough and seize power from Washington’s grasp.

Sadly, this idea won’t be well-discussed in this year’s national elections, but will surface again, whether the national right or left seizes power. Whatever its political spin, it is increasingly clear that the decades-long rush to centralize power has undermined our union, and left the country on the road, inevitably, to semi-permanent interminable conflict. It is time to reverse course.

This piece first appeared in The Orange County Register