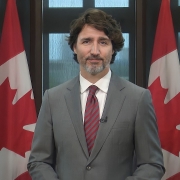 Prime Minister Justin Trudeau is likely to draw some encouragement from Tuesday’s U.S. midterms. Despite running an unpopular government, wand a weak economy, President Joe Biden’s party, which shares many views with Canada’s Liberals, out-performed all expectations and has kept the Republican “red tide” at bay, at least for now.

The message to Biden, and indirectly to Trudeau, who is similarly unpopular and also governs a country that the overwhelming majority thinks is headed in the wrong direction, that there is no need to change direction. They can both continue extreme policies on climate, control of media and protest. Indeed it could lead to the intensification of progressive policies that both Biden and Trudeau have eagerly embraced.

This may not be the best results for the Liberals when these same policies have produced clearly ebbing support. The current course both the U.S. and Canada are taking seems destined to create a recession, or at least a sustained downturn marked by low growth, as is the inevitable goal of “net zero” advocates. The losers here will be, first and foremost, blue collar workers, homeowners and younger people, all of whom will have to look increasingly to the state to fight off poverty. Welfarism as opposed to economic growth is increasingly baked into progressive policies. Barely half of Democrats even believe that hard work pays off and some suggest that the massive transfers during the pandemic that managed to reduce poverty should become permanent.

On the one hand, a serious recession will make more people dependent on state support, improving things for the Democrats as well as Canada’s Liberals and NDP. After all tough times — the Depression and the 2008 financial crisis — drove voters to the left, and provide the basis for an expanded welfare state along Swedish lines. This formula has been perfected in California, where Gavin Newsom, who won a lopsided victory, hands credit cards and subsidies to working class people that would make the legendary New York Democrat Boss Tweed blush, Indeed some Americans now compare Newsom to Trudeau, a tall, attractive youngish alternative to the aged Biden and the Democrats superannuated leadership.

Yet if this model has been seen to work in California, this is less the case in the rest of the country. Republicans did particularly well in the fastest growing parts of the country, notably Florida and Texas, where the incumbent governors, Ron DeSantis and Greg Abbott, won landslide victories and several suburban districts also switched. These are also areas that manufacturing, logistics and energy companies are moving to avoid regulatory regimes in blue states.

In Canada we may see the development of a similar divide, broken between metropole centres like Toronto, Montreal, and Vancouver, which will continue to go left. Meanwhile, those parts of the country that actually produce things — blue collar Ontario suburbs along with the already reliably conservative western provinces — will shift increasingly to the right. America may be becoming ever more divided, but so too could Canada.

The inexorable results of draconian green policies — what one socialist neatly labels “eco-Thatcherism” — means that more militant groups like Extinction Rebellion will continue to tap donors so they can disrupt commuters in their drive to “save the planet’.’ Hysteria is not a by-product but the core mission here. As longtime climate activist and former U.S. Senator Tim Wirth put it: “Even if the theory of global warming is wrong, we will be doing the right thing in terms of economic policy and environmental policy.”

INVITE JOEL TO SPEAK
Living up to the “Left Coast” Name