As the Biden administration settles in and begins to formulate its agenda, progressive pundits, politicians, and activists point to California as a role model for national policy. If the administration listens to them, it would prove a disaster for America’s already-beleaguered middle and working classes.

Biden, suggests an ecstatic account in the Los Angeles Times, seeks to “make America California again,” and he will have plenty of help. Californians will run Health and Human Services, the Treasury, Homeland Security, and Energy. Former California senator Kamala Harris is vice president, and San Francisco’s Nancy Pelosi rules the House of Representatives. Progressives like Laura Tyson and Lenny Mendonca see the shift as embracing “California’s distinctive approach to market capitalism.” The Golden State, they insist, can “show the way forward” toward a more socially just future.

As a California resident for nearly half a century, I wonder if these worthies see the same state I do. California has its wonderful spots, great neighborhoods, beautiful vistas, amazing entrepreneurs, and great amenities, but it makes a poor advertisement for social democracy. It suffers the nation’s highest poverty rate and presents the widest gap between middle- and upper-middle income earners of any state. Minorities—notably African-Americans and Latinos—do worse in California’s metros than elsewhere in the country, according to a recent study that we conducted at the Urban Reform Institute. In Atlanta, African-American median incomes, adjusted for costs, are almost double those in San Francisco and Los Angeles; Latinos earn $20,000 more in midwestern and southern cities than in the enlightened metros along the California coast.

California’s vast inequality is sustained not by broad prosperity but by the presence of three of the world’s biggest technology firms—Apple, Google, and Facebook— whose shareholders generate huge capital gains. The state’s model depends as well on venture-capital firms, many of them the same funders of earlier start-ups. Rather than the dazzlingly innovative and diverse economy of its heroic past, the California economy is now dominated by giant information cartels that seem happy, like feudal lords, to divide the vast digital domain among themselves. This top-down model was embraced recently by Governor Gavin Newsom, who boasts that a new round of initial public offerings demonstrate that the state’s growing billionaire class is “doing pretty damn well.”

An economy dependent on the veritable drug rush of an IPO does not share its bounty widely. Incomes for California’s middle and working classes have been heading downward for a decade, and the poor, despite an elaborate welfare state celebrated by Tyson and Mendonca, have seen their incomes tumble, even before the pandemic. Only the top 5 percent of taxpayers have done well, while the middle quintiles, and especially the bottom quarter, have suffered negative income growth. These results, the state budget admits, are worse than in the rest of the country.

This has left the state increasingly dependent on a relative handful of taxpayers, usually beneficiaries of stocks or real-estate inflation, to fill its coffers; according to Franchise Tax Board data, 46 percent of all personal income taxes are paid by individuals in the top 1 percent, with the top 5 percent paying two-thirds of all personal income taxes. Capital-gains collections have grown five-fold since 2010, while income taxes, which made up barely one-third of the state budget in 1980, now constitute two-thirds.

Meantime, the old middle class continues to fade, and a new one is, for now, largely stillborn. California’s regulatory policies, shaped largely by climate concerns, have pushed housing prices so high that the state, according to a recent AEI survey, is home to six of the nation’s worst markets for first-time homebuyers. The state accounts for four of the nation’s six largest metros with the lowest homeownership rates and, according to a recent study by economist John Husing, unionized construction workers can’t afford any median-priced homes in any coastal California county. There is less construction going on in California—and even if you build it, you can’t afford it. 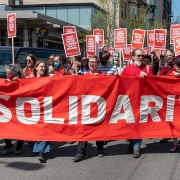 The Collapse of the Progressive Economy 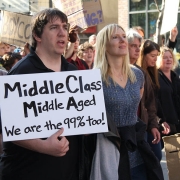 INVITE JOEL TO SPEAK
Can We Save the Planet, Live Comfortably, and Have Children Too?

Woke Politics Are a Disaster for Minorities
Scroll to top