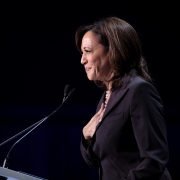 By virtue of being chosen Joe Biden’s running mate, Senator Kamala Harris of California has reasonable odds of becoming president someday—and probably better odds than the average running mate, given Biden’s advanced years and sometimes shaky public presentation. That’s cause for concern, not because she represents, as some conservatives fret, the far Left but because she will promote the spread of California’s increasingly feudal political and economic order, which undermines the upward mobility that long defined the California experience.

California today boasts a fabulously rich technology elite; it’s also home to the highest poverty rate among the states, adjusted for costs, according to the U.S. Census. Under its largely one-party regime, notes liberal economist James Galbraith, California has seen inequality grow at among the fastest rates in the country. The state endures the widest gap between middle and upper incomes in the country—72 percent, compared with a national average of 57 percent. The Golden State may see itself as a standard-bearer among advanced economies, but it suffers a level of inequality worse than Mexico. According to a recent United Way study, close to one in three families in the state are barely able to pay their bills.

California’s one-party system revolves around well-organized and well-funded interests, including tech moguls, Hollywood executives, green nonprofits, and unions. These interests have all been enthusiastic Harris backers and funders, and the senator and vice presidential nominee has also won over Wall Street, which appreciates her hands-off approach to regulation.

Any claim to populism—in the sense of overturning the current order—is fanciful when it comes to Harris. Her ties to the tech sector, including major backers of her failed presidential campaign, are particularly tight. Vox reports how she has “glad-handed” the tech top rank for decades, befriending the likes of Facebook’s Sheryl Sandberg, venture capitalist John Doerr, former Yahoo boss Marissa Meyer, Salesforce.com founder Marc Benioff, and Lauren Powell Jobs, widow of Steve Jobs. In contrast to Elizabeth Warren and Bernie Sanders, Harris is unlikely to push antitrust enforcement or defend free speech in ways that might inconvenience her backers. Concludes the radical-Left journal Jacobin: “Tech Monopolies Like Google Have a Friend in Kamala Harris.”

Yet closeness to Silicon Valley and Hollywood does not mean that Harris’s ascent will be good for businesses outside the charmed circle of tech and media conglomerates. Harris has backed a state tax and regulatory regime that has devastated the state’s middle and working classes. Once in the White House, she would presumably push similar policies ruinous for business—particularly small businesses unable to cope with high taxes, restrictive labor laws, and ever-more draconian environmental regulation.