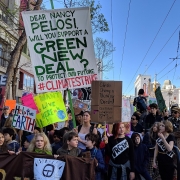 The Left’s fixation on climate change is cloaked in scientism, deploying computer models to create the illusion of certainty. Ever more convinced of their role as planetary saviors, radical greens are increasingly intolerant of dissent or any questioning of their policy agenda. They embrace a sort of “soft Stalinism,” driven by a determination to remake society, whether people want it or not—and their draconian views are penetrating the mainstream. “Democracy,” a writer for Foreign Policy suggests, constitutes “the planet’s biggest enemy.”

Today’s working and middle classes are skeptical about policies that undermine their livelihoods in the promise of distant policy goals. Even now, after a decade-long barrage of fear-mongering, a majority of Americans, Australians, and even Europeans doubt that climate change will affect their lives substantially. A recent UN survey of 10 million people found that climate change ranked 16th in concerns; most people in the developing world, notes environmental economist Bjorn Lomborg, “care about their kids not dying from easily curable diseases, getting a decent education, not starving to death.”

Like other people in high-income countries, most Americans want to improve the environment and many, if not most, are concerned about the potential impact of climate change. But they still rank climate as only their 11th leading concern, behind not just health care and the economy but also immigration, guns, women’s rights, the Supreme Court, taxes, income, and trade. A recent Harris-Harvard poll found that three-fifths of Americans reject the portfolio of Green New Deal policies, including a third of Democrats and half of people under 25.

Simply put, once the current green agenda is understood in terms of its impact on jobs and energy prices, it does not play well. In recent Australian elections, voters soundly rejected a progressive agenda that targeted suburban residents and the country’s large fossil-fuel industry. Opposition was particularly strong in primarily blue-collar areas like Australia’s Queensland. The results in Australia led local celebrities and pundits to brand their fellow citizens as unremittingly “dumb.”

Areas dependent on energy and manufacturing—such as Appalachia, Ontario, Alberta, the U.S. Midwest, and the British midlands, have pushed back against the prospective green regime. Even Germany has seen mounting opposition to green policies, which have sent the country’s powerful industrial base reeling from the associated high energy costs. But it’s not just miners, oil-riggers, and factory hands resisting the greens. French residents trying to make a living outside central Paris, and their counterparts in normally placid places like Norway and the Netherlands, have taken to the streets, sometimes violently.

INVITE JOEL TO SPEAK
The Slaughter of the Tech Unicorns