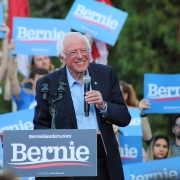 This past week, in most states, America’s liberal party voted for a doddering, but non-threatening old man, rejecting a strident socialist from Vermont. But second thoughts about socialism appear not to be on the agenda for California’s Democrats, who almost single-handedly kept Bernie Sanders’ anti-capitalist crusade from an untimely implosion.

California, notes longtime Democratic activist Morley Winograd, can create “its own weather” and its massive wealth leads some to believe it can ignore the gravity that bounds the rest of the nation to terra firma. Voters in Texas, and across the South, even in deep blue Massachusetts and old progressive Minnesota have showed understandable caution about embracing the Sanders call to “revolution.”

But not the Democrats of the Golden State. About 45 percent of them voted for Sanders and his more respectable doppelganger Elizabeth Warren. Only Colorado, which seems to be rehearsing for a role as the next California, and Vermont, which is used to Bernie, followed the leftist path.

California’s Latinos, who historically have prided themselves on the embrace of hard work and self-sufficiency, seem increasingly attracted to the notion of ever more elaborate state largesse — free college, free health care and rent control on a national basis that is at the center of the Sanders campaign.

Sanders, according to New York Times exit polls, won some 55 percent of California’s Latino vote and, combined with Warren, they constituted almost two-thirds of all votes cast by Hispanic Democrats. Los Angeles County, the heart of Latino California, gave half its votes to Sanders and Warren, overwhelming for the left candidates, compared to less than forty percent for Biden and Bloomberg.

Why do so many Latinos lean socialist in California? One reason is diminishing opportunity.

Over half of all Latino households barely can pay their bills, according to a United Way study, as do some 80 percent of all undocumented Latinos. In other states, working class people may have trouble with the consequences of the Green New Deal, which would devastate sectors, like manufacturing and energy; for example, 60 percent of Texas Democrats express opposition to the Sanders-backed Green New Deal. But these jobs are already either stagnating or have disappeared in California; many, notably in energy, are slated for extinction. You don’t tend to worry about jobs that no longer exist.

The African American vote here, like their counterparts around the country, supported moderate candidates, but nearly forty percent still supported the Sanders-Warren tandem. In Texas, barely thirty percent cast their votes in favor of those calling for the radical restructuring of the nation’s economy, Sanders and Warren. African Americans in Texas, suggests former Houston City Council Carroll Robinson, chair of the Texas Coalition of Black Democrats, “are more moderate than revolutionary.”

The impact of California’s economic model

Many state boosters, including our telegenic governor, see California as a superior model of economic development. But it more accurately might be seen as different, and not always in good ways. Our state’s high taxes and regulatory regime may thrill progressives but also promotes ever more intense class divisions. Our state may be rich in the aggregate but a diminishing part of middle, and even more so, the working class have little chance of ascending economically.

Over the past decade, the state has created some great jobs, but the vast majority have been below the median income, and two in five under $40,000 a year, not exactly “a living wage” in a super-expensive state. The lack of high-paying jobs combined with soaring property prices has made the prospect of buying a home — historically the prime marker of entrance into the middle class — shockingly less here than in the rest of country.

These trends hold particularly true for millennials and minorities, the groups most responsible for the socialist surge. Homeownership rates for Latinos and African Americans, according to the American Community Survey, are 10 to 20 percent lower in the Golden State’s largest metropolitan areas than in large metros either Texas or Florida. Millennial homeownership in the state has largely tanked far more than in the rest of country.

If you want to explain our leftward surge, unequal economy and the ascendancy of renters goes a long way. California ranks second to New York in its percentage of renters. As a new study by Apartment List shows, they naturally favor such things as rent control.

The rebellion of the bees

Perhaps nothing lays the groundwork for socialism , whether of the authoritarian or the milder western European version, than the spectacle of obscene wealth amidst crushed aspirations. In the late 1800s and 1900s, the disparities between rich and poor boosted the rise of socialist parties almost everywhere, and in the obscenest cases, such as Russia, the emergence of Communism as well.

California, more than most parts of the US, is now experiencing a 21st century version of this same scenario.

Huge fortunes are made by Silicon Valley’s oligarchs, and even some of their Hollywood counterparts, but almost half of working Californians, according to a recent survey, are living close to the edge and are barely able to pay their bills.

Even those who have the wherewithal to shell out $3000 for a one-bedroom apartment in San Francisco and many parts of Los Angeles to encounter homeless encampments that demonstrate that our state is not exactly working as we expect.

Even in the heart of the now slowing “California boom,” Silicon Valley, there is a growing divide between the ruling oligarchy and their worker bees.

In the past the moguls and their workers shared common values, at least rhetorically on such things as climate change, gender equality and immigration. Voters in Silicon Valley routinely backed the same candidates — Bill Clinton, Barack Obama, Jerry Brown — as their bosses. But increasingly the bosses and the bees are diverging.

Its unlikely many oligarchs would like to see Bernie or Elizabeth Warren strip much of their fortunes and force their companies to break into smaller pieces.

One might think their workers share their concerns, particularly if they had a big stake in the success of their companies or had a good chance of starting their own. But entrepreneurial opportunity for people without access to venture capitalist coffers has declined in an era of relentless tech industry concentration. Tech workers may be coddled with free meals, ping-pong tables and lavish parties, but even at high salaries, they end up spending much of their income on rent, often sharing small spaces with co-workers.

So far in the 2020 race, the biggest sources of money for Sanders has not been the traditional working class but tech workers, and academe. Indeed the largest contributors to his campaign are led by the University of California, followed by Alphabet, Amazon, Microsoft and Apple. California alone accounted for almost 22 percent of all Sanders’ funds.

The single largest source of Sanders money comes for San Francisco’s 94110 zip code, a rapidly gentrifying area where median price of a home, including condos, is over $1 million; the area is overwhelmingly white and average incomes surpass $100,000 annually.

On election day the tech heartland helped pace Sanders win. He easily beat Biden in Santa Clara, San Mateo and San Francisco, winning the home of internet giants like Uber, Lyft, Air BnB, Twitter, and Salesforce by two-to-one in the state’s dominant political center. Together with Warren, the left captured 53 percent of the city’s vote.

This parallels the steady decline of oligarchal influence in Sacramento is fading, as evidenced by the passage of Assembly Bill 5, aimed precisely at Uber and Lyft, among others, and new legislation which threatens higher taxes on companies whose CEOs make too many multiples than their employees.

Combined with a diminished middle class, a huge underclass and poor prospects for the state’s “majority minority” California, the heartland of cutting-edge capitalism, ironically has morphed into the great incubator of American socialism. The only solace is Democrats in the rest of the country may prove unwilling to go along for the ride.