You are here: Home1 / Articles2 / Politics3 / Between the Stupid and the Evil 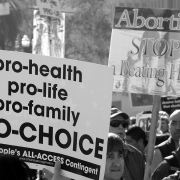 So said the late conservative journalist M Stanton Evans. It is commonplace, even among Republicans, to label the Republicans ‘the stupid party’, while lambasting the Democrats as ‘the evil party’. Today, both parties are working overtime to live up to their reputations, to the detriment of all Americans.

The recent leaked draft Supreme Court ruling, which would end the federally sanctioned right to abortion, is driving the stupidity index skyward. Democrats may be in disarray and getting pummelled in the polls, but the GOP’s religious, know-nothing wing is working overtime to bolster their prospects. The governor of Mississippi, for example, has mused about banning contraception, something that would have little purchase among most voters. Even the usually savvy Senate minority leader, Mitch McConnell, no doubt worried about his right-wing fringe, has suggested a national abortion ban, something other Republicans like Arkansas governor Asa Hutchinson oppose on sensible political grounds.

To say this is bad politics is an understatement. As Gallup has consistently found, barely one in five Americans supports a total ban on abortion, while fully one-third favours no restrictions at all. Most Americans wanted to keep Roe. Embracing a total ban, clearly opposed by most voters, makes the right look at least as authoritarian as the academic establishment, the media minions and the woke corporate set.

The most glaring example of right-wing overreach came earlier this year, when Texas passed an abortion law so extreme it effectively bans all abortions after six weeks, while deputising individuals to bring civil lawsuits against their neighbours should they learn that their neighbours have performed or assisted in an abortion. Talk about stupid. A Marist survey done after the Texas bill passed found that both the bill’s provisions – the six-week deadline and the deputisation scheme – were rejected nationally not only by Democrats, but also by Republicans, suburbanites, small-town and even rural residents. GOP strategists are particularly worried about the bill’s impact in the suburban communities that are Texas’ – and the nation’s – prime political battlegrounds.

Business leaders fear that, at a time when many companies are flocking to Texas and other red states, a new spate of highly restrictive abortion laws could chase away investors, corporations and skilled workers. The Texas law has already generated a strong set of counter-measures among tech firms, likely to be extended with the demise of Roe.

Such stupid overreach is also occurring in education. The tenets of critical race theory (CRT), widely adopted by the Biden administration and in schools, do not command public support, much like the entire PC agenda. But the Republicans’ response has been not to defend and engage in open discussion, but to adopt a book-banning approach reminiscent of progressive authoritarianism. By embracing top-down diktats, the daft Republicans are undermining the old conservative notion of allowing local control. CRT and other deluded educational theories are indeed a danger, but the battle needs to be carried out via local school boards, where these policies are now being regularly rebuked by parents. Let common sense flow from below.

Kotkin: Voters Concerns Not Being Addressed by Biden Administration
Scroll to top