You are here: Home1 / Articles2 / Demographics3 / Anti-Semitism is Creeping Back into America 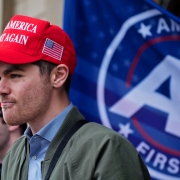 Donald Trump’s intimate tête-à-tête with Kayne West and white nationalist and Holocaust-denier Nick Fuentes should have caused a storm among Republicans. While Trump has tried to distance himself from the meeting, claiming not to know Fuentes, it was troubling to see how few conservatives spoke out in the first place. Though some have stepped up, like former New Jersey Governor Chris Christie and Arkansas Governor Asa Hutchinson, as well as outlets like Breitbart and National Review, others remain oddly silent.

This is yet another sign that anti-Semitism in America, as in Europe, is creeping back into American life. Republican leaders may secretly hope that Trump will just implode, but they fear that the millions of people who still follow this increasingly unhinged and dangerous man will punish them in the primaries. Even now, the hold he has over the party is so great that few are willing to take a stand against him on this issue.

The statements by Trump’s acolytes have been equally horrifying. Conservative media icon Candace Owens, for example, stated that Hitler would have been “fine if confined to Germany”. Meanwhile, Pennsylvania gubernatorial candidate Doug Mastriano embraced a Christian nationalist platform, while Trump loyalists hurled anti-Jewish invective at the judge who approved the raid on his Mar-a-Lago estate. There is no record of Trump objecting to any of this.

The progressive Left, of course, will have a field day with Trump’s unseemly banquet, and will no doubt use it to link the GOP with “semi-fascists” like Fuentes and his followers. Yet these same progressives — including powerful Jewish organisations like the Anti-Defamation League — have a history of downplaying anti-Semitism from the Left. ADL CEO Jonathan Greenblatt admitted as much when he criticised anti-Semitic elements in the BLM movement. At a recent seminar I conducted during Yom Kippur, an ADL leader even admitted the group backed BLM because they “did not want to appear racist.”

The frightening development is not just the existence of anti-Semitism but its growing acceptability. On the Right, figures like the recently re-elected Rep. Marjorie Taylor Green — who once suggested Jews were shooting lasers to get Santa Claus — and Rep. Paul Gosar happily attended a recent white nationalist event organised by Fuentes.

INVITE JOEL TO SPEAK
After Intersectionalism