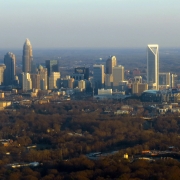 Even as vaccination increases across the United States and an end to the tragedy of the Covid-19 pandemic seems in sight, the economic, fiscal, political, and geographic fallout from the virus cannot be overstated: a massive public health crisis that left more than half a million Americans dead, an economic catastrophe that caused record unemployment and small-business closures, and a seismic political event that surely helped tip the presidential election. The pandemic will pass, and the economy will revive, as it is already doing. But in geographic terms, today’s Covid-precipitated crises may well prove to be the most transformative event that America has experienced since the great migration to the suburbs after World War II. After hitting record lows, mobility is up as a result of the pandemic. Between 14 million and 23 million Americans say that they are likely to move as a result of their ability to work remotely, according to research by economist Adam Ozimek. These geographic shifts are even more critical because they point in many directions and represent less a fundamental break with the past and more an acceleration of changes already under way in how we live and work.

America’s economic geography has long been shaped by the interplay of pull and push forces. On the one hand, centrifugal forces pull some people out of cities: families seek more affordable space, backyards, and access to better schools. With the wider scope of choice that remote work affords, some are casting their nets wider and moving farther afield, not just to suburbs but also to other cities, smaller metro areas, and even rural communities. On the other hand, centripetal forces remain that push other groups and activities toward urban centers. College-educated young people in their mid-twenties to mid-thirties have accounted for roughly half the revival of close-in urban neighborhoods (those located near a metro area’s central business district) over the past decade, according to research by Joe Cortright of City Observatory. They are likely to do so, perhaps even more profoundly, in the decade ahead, propelled in part by falling urban real-estate prices. Superstar cities may regain some of their former creativity as artists, musicians, writers, and the like, many uprooted by the pandemic, can once again afford to live in them.

It’s hard to predict how this will play out in the long run, but the pandemic has placed a new burden on all communities. Big cities, Sunbelt boomtowns, small urban regions, and rural areas alike must develop effective strategies for recovery in a post-pandemic world.

Dense cities suffered the most total fatalities largely because, as globally connected places, they were hit by the virus in its first, deadliest phase. Time and research have shown, however, that they are not uniquely vulnerable. By the fall of 2020, the second wave of infections and death had spread out across the country to smaller states and rural communities. While large urban centers and big states still have the highest overall death tolls, more sparsely populated places overtook them on a per-capita basis, with North Dakota logging the nation’s highest Covid death rate in the fall. The danger lies not in density per se, but in overcrowding: the number of people per square foot, as opposed to square mile. (See “Problem: Overcrowding,” New York City: Reborn, 2021.) A kind of “exposure density” thus seems key to the spread of the virus.

Yet superstar cities are not about to disintegrate. Cities are more resilient than in the past. The swift distribution of vaccines makes urban comebacks more likely, and far more rapid, than those of ancient cities rising after eruptions of the plague. London recovered from cholera, and New York added 2 million people in the wake of the Spanish flu. Berlin survived Hitler, World War II, and a half-century of partition. New York roared back after 9/11. Large global cities are incredibly resilient places. (See “The Enduring City,” New York City: Reborn, 2021.)

But part of the exodus from New York and San Francisco is rooted in factors that will outlast the virus and that were already in play earlier. Both cities lost people before the pandemic, largely because of their increasing unaffordability. The rate of growth in America’s biggest and most expensive cities began to decline as early as 2015. The pandemic has worsened the new urban crisis of rampant gentrification, high living costs, and class and racial division—all sharply dramatized amid the wave of protests and riots in the summer of 2020.

Richard Florida is a professor at the University of Toronto and a senior fellow at Heartland Forward. Joel Kotkin is the author of The Coming of Neo-Feudalism: A Warning to the Global Middle Class. He is the Presidential Fellow in Urban Futures at Chapman University, a senior fellow at Heartland Forward, and Executive Director for Urban Reform Institute. Learn more at joelkotkin.com and follow him on Twitter @joelkotkin.

The Geography of COVID-19
Scroll to top