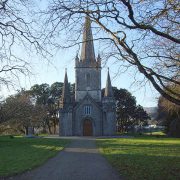 In this season when most Americans are more concerned than usual with spiritual matters, it may be time to ask whether religion still matters. Certainly religiosity’s worst side has been amply on display in recent years, from the fanaticism of Islamic terrorists to the annoying sanctimoniousness of Rick Santorum.

On the surface, religion appears to be losing some of its historic influence. For the first time in a decade, according to a survey by the Pew Research Center, more Americans — excepting the Santorum base — want their politicians to talk less about faith as opposed to more.

Organized religion in particular may be losing its appeal, particularly among the young. According to recent surveys, religious affiliation in the United States appears to be declining somewhat and secularism is on the rise; over the past 40 years the percentage professing no religious affiliation has grown over 140 percent while the percentage of the deeply faithful dropped 15%. The share of the population who claim “no religion” has risen to 15% overall and 22% of those between 18 and 29, notes a 2009 study by researchers at Trinity College. If these trends continue, the non-affiliated could represent a larger part of our population than the largest denomination, the Catholic Church.

In large parts of the high-income world, notably Europe and parts of East Asia, the decline of religion is even more pronounced. Half of all Europeans, for example, have never attended a religious service, compared to just 20% of Americans. Roughly 60% of Americans, notes the Pew survey, consider religion important, twice the rate of Koreans, Japanese, Britons or even Canadians.

Given that some of these countries have performed about as well or better than the U.S. in recent years, one might conclude that the historic link between religious faith and material progress — so central to the work of Max Weber – has been irretrievably broken. Yet in reality, the religious connection with economic growth may be still far more important than is commonly supposed.

Many in the pundit class identify religion as something of a regressive tendency, embraced by the less enlightened, the less skilled, intelligent and educated. Yet some scholars, such as Charles Murray, point out that religious affiliation is weakening most not among the middle and upper classes but among the poorer and less educated who traditionally looked to churches for succor and moral instruction. Secularism may have not hurt the uber-rich or the academic overclass so far, but it appears to have helped expand our lumpenproleteriat.

Some might be surprised to learn that religious affiliation grows with education levels. A new University of Nebraska study finds that with each additional year of education, the odds of attending religious services increased by 15%. The educated, the study found, may not be eschewing religion, as social science has long maintained, even if their spiritual views tend to be less narrow, and less overtly tied to politics, than among the less schooled.

Overall the most cohesive religious groups — such as Mormons and Jews — still outperform their religious counterparts both in educational achievement and income. Both Jews and Mormons focus on helping their co-religionists, providing a leg up on those who depend solely on the charity of others or the state. In countries with a substantial historical Protestant influence such as Germany, Denmark, Sweden and the Netherlands continue to outperform economic the heavily Catholic nations like Italy, Ireland and Spain, according to a recent European study. The difference, they speculate, may be in Protestant traditions of self-help, frugality and emphasis on education. None of this, of course, would have been surprising to Max Weber.

Religious people also tend to live longer and suffer less disabilities with old age, as author Murray notes. Researchers at Harvard, looking at dozens of countries over the past 40 years, demonstrated that religion reinforces the patterns of personal virtue, social trust and willingness to defer gratification long associated with business success.

But perhaps the most important difference over time may be the impact of religion on family formation, with weighty fiscal implications. In virtually every part of the world, religious people tend to have more children than those who are unaffiliated. In Europe, this often means Islamic families as opposed to increasingly post-Christian natives. Decline in religious affiliation — not just Christian but also Buddhist and Confucian — seems to correlate with the perilously low birthrates in both Europe and many East Asian countries.

Singapore-based pastor Andrew Ong sees a direct connection between low birthrates and weakened religious ties in advanced Asian countries. As religious ideas about the primacy of family fade, including those rooted in Confucianism, they are generally supplanted by more materialist, individualistic values. “People don’t value family like they used to,” he suggests. “The values are not there. The old values suggested that you grow up. The media today encourages people not to grow up and take responsibility. They don’t want to stop being cool. When you have kids, you usually are less cool.”

Religious people, prepared to be seen as uncool, are more likely to seek to produce more offspring. In the United States 47% of people who attend church regularly see the ideal family size as three or more children compared to barely one quarter of the less observant. Mormons have many more children than non-Mormons; observant Jews more than secular. “Faith,” the demographer Phil Longman concludes, “is increasingly necessary as a motive to have children.”

This pattern is reflected in the geography of childbearing. Where churches are closing down, most particularly in core urban areas such as Boston or Manhattan, as well as their metropolitan regions, singletons and childless couples are increasing. In more religiously oriented metropolitan areas like Houston, Dallas-Fort Worth, Salt Lake City and Phoenix, the propensity to have children is 15% to nearly 30% higher (as measured by the number of children under the age of 5 per woman of child bearing age– 15-49).

In the future, many high-income societies, whether in East Asia, Europe or North America, may find that religious people’s fecundity is a necessary counterforce to rapid aging and eventual depopulation of the more secular population . The increasingly perilous shape of public finance in almost all advanced countries — largely the result of rapid aging and diminished workforces — can be ascribed at least in part to secularization’s role in falling birthrates.

There may be other positive fiscal effects of religiosity. Religious people donate on average far more to charities than their secular counterparts, including those unaffiliated with a religion. Nearly 15% of the religious volunteer every week compared to just 10% among the secular.

Social networks, much celebrated among the single, might provide people with voices, but religious organizations actually do something about meeting real human needs. Organized religion provides a counterweight to the European notion that we must rely on government for everything. Poor people educated or fed by the charities of mosques, churches, and synagogues relieves some of the burden faced by our variously tottering states and shredding social welfare nets. Aging baby boomers, notes author Ted Fishman, may be forced to rely more on the “kindness of strangers” from religious backgrounds to take care of them in their old age.

Sadly few prominent religious leaders deliver this message effectively, often preferring to scold non-believers. This is unfortunate since what the faithful do in the real world, at home and in their communities, may prove ever more crucial to the viability of our societies in the future.