You are here: Home1 / Articles2 / California3 / Salinas Dispatch: A Silver Lining in the Golden State 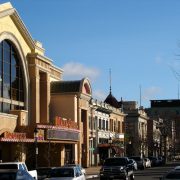 From a distance, a crisis often takes on ideological colorings. This is true in California, where the ongoing fiscal meltdown has devolved into a struggle between anti-tax conservatives and free-spending green leftist liberals.

Yet more nuances surface when you approach a crisis from the context of a specific place. Over the past two years my North Dakota-based consulting partner, Delore Zimmerman, and I have been working in Salinas, a farm community of 150,000, 10 miles inland from the Monterey coast and an hour’s drive south of San Jose.

Our work has been funded by a variety of sources, including the city, local business interests and the Chamber of Commerce.

Our goal has been to find ways to promote upward mobility in the town, which is almost two-thirds Hispanic. Poverty is widespread, and gang problems rank among the worst in California. Unemployment, devastated by the recent recession, hangs at around 15%.

These conditions are not at all unusual for inland California, and they are particularly prevalent in farm regions. In the Central Valley, over the next range of mountains, conditions are far worse, with some communities losing thousands of acres in production and unemployment rushing upward of 40%.

One liberal journalist, Rick Wartzman, recently described the vast agricultural region around Fresno as “California’s Detroit.” As environmentalists push to cut back on water supplies and protect fish populations in the San Francisco Bay Delta, Wartzman notes, its local workers and businesspeople “are fast becoming a more endangered species than Chinook salmon or delta smelt.”

In Salinas, where water comes from local aquifers, wells and the Salinas River, death seems less imminent, but there is a profound sense that things may be deteriorating. Local growers worry about regulatory constraints that will drive up costs to meet new state greenhouse gas standards. They also fear a possible county initiative, promoted by the well-funded local greens, to ban the growing of genetically modified foods.

The growers’ response to the pressure – as with other businesses in California – is not to quit but to scale down operations. Some are cutting back thousands of acres of lettuce and other green crops that have been the prime business for the area for nearly a century.

Yet we also see many reasons for hope. Salinas remains a unique place with an amazing richness in what the French call terroir, a combination of climate and soil. The city’s most famous son, John Steinbeck, wrote of the Valley’s unique topography:

“The high gray-flannel fog of winter closed off the Salinas Valley from the sky and the rest of the world. On every side it sat like a lid on the mountains and made of the great valley a closed pot.”

Growing conditions in Salinas cannot be easily duplicated elsewhere. Its richness has created a cornucopia responsible for the predominant part of the area’s private-sector employment.

But it’s not just physical factors that make Salinas – and California – so productive. People matter too. The area is populated by scores of hard-driving agricultural families, people whose forebears transformed the place into the “salad bowl” of a nation. By 1952, when Steinbeck published East of Eden, Salinas produced 70% of the nation’s lettuce and much of its fresh vegetables.

Salinas’ growers are not hereditary gentry; talk to local farmers and you find people whose roots lay in Italy, Portugal, Ireland, Japan and, increasingly, Mexico. “People, if given opportunity, can accomplish anything,” notes Lorri Kester, CEO of Mann Packing, a leading broccoli producer. “Many of the firms that lead us now were started by ‘Okies’ who worked the land. Now we see the same things with Latinos who started out as hands and now are foremen or managers.”

What the Salinas growers do best – like their high-tech counterparts up in the Santa Clara Valley – is innovate. Working with the USDA and University of California-Davis scientists, they have led the way in creating new strains of vegetables and new ways of marketing, including the notion of “salad in a bag.”

But not all the knowledge that makes Salinas such an economic powerhouse comes from entrepreneurs or PhDs. Like many agricultural communities, Salinas has had a sometime brutal labor history, particularly in the 1930s. The worst of this is now thankfully over, but farm labor remains a tough and often unrewarding profession.

Yet even the hardest-edged growers acknowledge the importance of their labor force. Although education levels remain relatively low, our research revealed an extraordinarily high concentration of people with practical skills that can be applied to growing the agricultural economy. Future mechanization may reduce the overall employee counts but will make growers even more dependent on skilled workers in the fields.

This proficiency, acquired in the fields and the processing sheds, has helped create another product for the Valley: expertise. Salinas growers, foreman, irrigation workers and marketers now sell their knowledge in other parts of California, as well as to Arizona, Mexico and, increasingly, East Asia. “I am seeing a lot of product and technical products from Salinas go to China and elsewhere,” notes Frank Pierce, a local agricultural consultant.

Salinas also teaches you to avoid the great distinction made by many pundits between the “knowledge” industry and the productive type that focuses on tangible goods. A successful economy draws on information but also creates real products. There is a relationship between the two that is dynamic and has long been a critical component of California’s economic vitality.

This is not just true of Salinas. I learned long ago from the founding fathers of Silicon Valley – people like Intel founder Bob Noyce and venture capitalist Don Valentine – that the practical knowledge from making circuits and chips helped create the Valley’s unique engineering terroir. Similarly, the “magic” of Hollywood does not emerge full-blown from the brain storms of stars and moguls. The entertainment complex’s unique abilities grow from the interplay of practical knowledge of less glamorous camera people, grips, editors, caterers and prop-managers servicing what Angelenos invariably refer to as “the industry.”

Sadly, this insight largely has been lost on California’s political and business leadership. Among the so-called “progressive” community, production of any kind, outside of small artisanal farms or funky software shops, is disdained.

This anti-development ethos has gained extra traction by claims that large farms and factories might add to the “carbon footprint” of a given place. Among well-funded foundations and some corporate leaders there remains an implicit sense that California can still mine enough riches in cyberspace to support the vast hoi polloi.

Yet in reality, Californians need hard jobs, even mundane ones. The farm, sound stage or electronics factory provide the employment essential to broad-based prosperity. And when those jobs leave California they usually migrate to a place – whether over the border or abroad – where wages are lower and environmental controls are far weaker.

This is not to argue that California’s right has the answers either. Lower taxes are generally preferable to higher ones. But in Salinas – and California – sometimes higher taxes might be preferable to cutting services, like the critical training offered by community colleges, which make the economy work and offer hope to the younger generation.

In Salinas, Mayor Dennis Donahue, a Democrat of the Pat Brown variety, has embraced a call to raise the sales tax in order to maintain basic services. It’s not an ideal solution, but in the real world of running a city, particularly one with a big gang problem, you don’t want to cut back on police and libraries or add to already surging unemployment.

What California needs most now is what it’s most missing: common sense and a sense of balance. This is what we learned in Salinas. California cannot be saved by ideologies – it needs to be saved from them.

To be sure, preserving the land and air quality should remain a priority; it is the basis of California’s riches and unique appeal. But sustainability – the great buzzword of our time – needs to apply not only to the environment but also the economy and society. The right-wing solution of lower taxes even at the price of eviscerating the public sector and letting the infrastructure deteriorate does not constitute a program for long-term prosperity.

We prefer an approach that focuses on practical steps for private and public sectors to collaborate on restoring economic growth. In Salinas, this means establishing – through cooperation with Hartnell, the local community college – a center for the development of agricultural technology. Salinas could use its combination of intellectual and grassroots knowledge to become the Silicon Valley of the “fresh” economy. It would also serve as a center of practical research on E. coli and other diseases that threaten the entire agricultural industry.

Another step would be to expand the area’s thriving wine corridor to promote the region’s vintages. And there needs to be a plan to restore the historic central core into a bustling business district and to attract the predominately Latino shoppers, now lured to malls and outlet centers outside the city, back into town.

These steps will take effort and money, but neither free market ideology nor green zealotry alone will get it done. California’s greatness was created not just by entrepreneurs or through its public sector, but in a clever, pragmatic melding of the two. Blessed with resources of topography, climate and human skill, our state should not allow dueling extremes to turn a global paragon into a planetary laughingstock.

INVITE JOEL TO SPEAK
Madison job growth ranks in the middle of the packForget Second Stimulus; We Need Economic Vision
Scroll to top