You are here: Home1 / Articles2 / Demographics3 / Why the Great Plains are Great Once Again 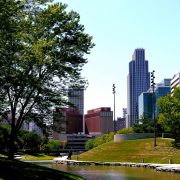 On a drizzly, warm June night, the bars, galleries, and restaurants along Broadway are packed with young revelers. Traffic moves slowly, as drivers look for parking. The bar at the Donaldson, a boutique hotel, is so packed with stylish patrons that I can’t get a drink. My friend, a local, and I head over to Monte’s, a trendy Italian place down the street. We watch a group of attractive 30-something blondes share a table and gossip. They look like the cast of the latest Housewives series.

It might sound like an evening in the Big Apple, but this Broadway runs through downtown Fargo, N.D. A decade ago, this same street was just another unremarkable central district in a Midwestern town: bland restaurants, adequate hotels, no decent coffee. After the local stores closed for the day, the street was mostly populated by a few hard-drinking louts.

That has all changed, part of a transformation that foreshadows the growth of the vast Great Plains region. “I come from a big city, but I like the lifestyle here,” says Marshall Johnson, an African-American who played football for the nearby University of Minnesota, Crookston, and now works for the local Audubon Society. “In a decade this place will be a small Minneapolis. Everyone sees a bright future ahead.”

Johnson may be an anomaly in this still homogeneous state—the population is more than 90 percent white, and Native Americans constitute the largest minority by far—but he senses something very real. Throughout the good times and, more important, the bad of this new millennium, the cities of the plains—from Dallas in the south through Omaha, Des Moines, and north to Fargo—have enjoyed strong job growth and in-migration from the rest of the country. North Dakota boasts the nation’s lowest unemployment rate—3.6 percent, compared with the national average of 9.7—with South Dakota and Nebraska right behind it.

The trend has been particularly strong in urban areas. Based on employment growth over the last decade, the North Dakota cities of Bismarck and Fargo rank in the top 10 of nearly 400 metropolitan areas, according to data analyzed by economist Michael Shires for Forbes and NewGeography.com. Much of that growth has come in high-wage jobs. In Bismarck, the number of high-paying energy jobs has increased by 23 percent since 2003, while jobs in professional and business services have shot up 40 percent.

That’s not bad for a region best known by East Coast pundits for the movie Fargo. It got so bad a decade ago that even local boosters suggested North Dakota jettison the “North” to make the place seem less forbidding. Two Eastern academics, Frank J. Popper and Deborah Popper, predicted that the region would, in a generation, become almost totally depopulated, and proposed that Washington speed things along and create “the ultimate national park.” Their suggestion: restock the buffalo.

Certainly, many small towns across the plains—such places as Reeder, N.D., which lost its only school, or Mott, N.D., with its struggling downtown—have withered. Others are likely to disappear altogether. But growth has rebounded in larger towns, according to Debora Dragseth, an associate professor of business at Dickinson State University. She describes places like Fargo—with a population approaching 200,000—as “sponge cities,” absorbing population from rural areas. Just a decade ago, those people fled the region entirely.

The primary drivers of this new growth, says Dragseth, are basic industries like agriculture and energy. Salaries may be low by coastal standards, but so are living costs. And the prices of commodities like beef, soybeans, and grains have generally continued to rise, due in large part to growing demand from China, India, and other developing countries.

But the biggest play by far is in energy, including coal, natural gas, and oil, which exist in prodigious quantities from Texas to the Canadian border. Besides the vast reserves of oil that have made it the country’s fourth-largest producer, North Dakota possesses significant deposits of natural gas and coal, as well as huge potential for wind power and biofuels. These industries are drawing hundreds of skilled workers from places like California and Michigan, who are moving into Bismarck, the state’s capital, and towns to the west.

The energy boom has placed states like the Dakotas and Texas in an enviable fiscal situation. Oil and gas revenues are filling up their coffers, allowing them to eschew the painful cutbacks affecting most coastal states. North Dakota has a $500 million surplus, and next year the cash gusher could rise to more than $1 billion, estimates Dragseth. That could go a long way in a state with barely 600,000 people.

Of course, the people of the plains have seen booms before—commodity prices soared early in the last century, and there was an oil-fired boom back in the 1970s. But growing demand in developing countries could sustain long-term increases of energy and agricultural products. Niles Hushka, CEO of Kadrmas, Lee & Jackson, a growing engineering firm active in Bismarck, sees other factors working for the plains. The public schools are excellent; the Dakotas, Iowa, Minnesota, Nebraska, and Kansas enjoy among the highest graduation rates in the country. North Dakota itself ranks third and Minnesota fourth (after Washington, D.C., and Massachusetts) in the percentage of residents between 25 and 34 with college degrees.

Nowhere is this potential clearer than in Fargo, which is emerging as a high-tech hub. Doug Burgum, from nearby Arthur, N.D., founded Great Plains Software in the mid-1980s. Burgum says he saw potential in the engineering grads pumped out by North Dakota State University, many of whom worked in Fargo’s large and expanding specialty-farm-equipment industry. “My business strategy is to be close to the source of supply,” says Burgum. “North Dakota gave us access to the raw material of college students.”

Microsoft bought Great Plains for a reported $1.1 billion in 2001, establishing Fargo as the headquarters for its business-systems division, which now employs more than 1,000 workers. The tech boom started by Burgum has spawned both startups and spin-offs in everything from information technology to biomedicine. Science and engineering employment statewide has grown by 31 percent since 2002, the highest rate of any state.

These jobs, and the people they attract, shower cash on Broadway’s busy bars and dining establishments. Both Burgum and his ex-wife, Karen, have been driving forces in this restoration. Karen led the effort to convert the once seedy Donaldson into a stylish downtown hotspot, featuring the work of local artists on the walls and bison on the menu. “People thought I should be put in a padded cell for doing this,” she says. Of course, entrepreneurs like the Burgums will continue to face big challenges to lure customers and workers—cold weather, isolation, and competition from more urban places. But for the first time in generations, parts of the Great Plains have a chance to be great again.