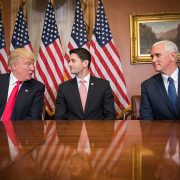 It certainly seems as if boomers are in charge in America now, with Donald Trump about to move into the White House and members of the generation in the majority in Congress. Meanwhile, huge attention has been paid over the past few years to the emergence of the boomers’ children, the millennials, on the national scene. But relatively little thought has been accorded to the group sandwiched between the two mega-generations: Generation X.

Referred to by some pundits as a “lost generation,” the Xers, born between the mid-1960s and 1980, may be less numerous than either the boomers or millennials, the latter of whom now slightly outnumber them in the workforce, but Gen X seems likely to dominate the near future. Not only do they now make up the majority of of managers at U.S. companies, they are far more entrepreneurial than millennials, both at early ages and now. Their rate of startup formation is roughly twice that of millennials, and on the way up, while the younger generation’s rate has been on the decline.

Financially, they are clearly the ascendant generation. According to analysis by the Deloitte Center for Financial Services, they now have 14 percent of the nation’s wealth compared to just 4 percent for millennials and 50 percent for the boomers. But by 2030, as the boomers finally start to fade from the picture, Xers will dominate the nation’s wealth, accounting for 31 percent, twice the projected share of millennials.

Politically they also seem destined to take power next. They are gradually replacing the aging boomers in Congress. Their politics are neither as conservative as the boomers nor as liberal as millennials: younger Xers tilted slightly to Clinton in the last election, older ones favored Trump. Right now there are 117 Xers in Congress compared to five millennials, with the most prominent being House Speaker Paul Ryan; it will likely take a generation or more for the millennials to challenge the Xers.

To be sure, millennials will dominate the future eventually, but the question is when. Boomers are living, and working, longer than ever. Over time, though, millennials’ overlords will come from the smaller but more aggressive X generation. Unlike the millennials, who received participation trophies and “good job” plaudits, notes generational analyst Morley Winograd, the Xers were the original “latch-key” kids who were forced to make their way in a county dominated by Boomers.

Critically, however much millennials may talk about changing the world, as a group they are entrepreneurial laggards, in large part responsible for America’s current depressed startup rates, the lowest in a quarter century. It’s the Xers — less coddled, with less college debt and just enough experience — who are starting and running more of the economy. In a word, they are tough, used to adversity and their time is coming.

With all these considerations in mind, we decided to take a close look at which metropolitan areas have been gaining the largest shares of 35 to 49 year olds, currently the Xers. This is critical not only because of their economic influence, but also because they are the ones who have the most children. If a metro area’s share of this age group is growing, it is likely to have more young people as well.

Using Census data from 2000 to 2015, we found that the share of 35 to 49 year olds grew most dramatically in the affordable Sun Belt. This makes sense as this is the age when home ownership is most critical and people are looking for the maximum income relative to costs. Being in your late 30s to 50 does not mean you have lost the ability to dream, but it does make addressing reality far more imperative than when in your 20s.

Many of the metropolitan areas where the 35-49 population has grown the most are precisely those that have topped most of our best city lists. At the apogee is Austin, whose 35 to 49 year old population has expanded a remarkable 44.9% since 2000, compared to a 6.6% national decline in this age range over that period. This suggests that although the bar scene and liberal politics appeal to many, other characteristics — such as relatively low housing prices, attractive suburbs and good-paying jobs — seal the deal for 35 to 49 year olds.

Housing and rent differentials have been particularly determinative for today’s 35 to 49 year olds. They suffered the most from the housing bust of 2007 and are only now entering the market with full force. They may not be able to afford the high prices of houses owned by coastal boomers, but they seem to be entering aggressively less expensive markets. Another reason they may be heading to these areas is to buy bigger houses than the small units now in vogue among millennial-craving builders.

Virtually all the other places that have experienced the biggest shift in this age group follow this pattern. No. 2 Raleigh-Durham’s population of 35-49s grew 40.1 percent, or 50.1 percent compared to the national rate, for many of the same reasons as Austin. Other places that attract these ages are generally low-priced dynamos, including No. 3 Las Vegas, No. 4 Charlotte, No. 5 Phoenix, and No. 8 Salt Lake City. Texas dominates the list here with four of the top ten, including No. 7 Houston, No. 9 Dallas-Ft. Worth and No. 10 San Antonio.

If we tighten of measurement to the years 2010 to 2015, the pattern is largely the same except for the emergence in the top 10 of such tech havens as metropolitan Denver and Portland, which have done very well during the tech boom. Yet surprisingly the 35 to 49 year old population share has remained stagnant in the epicenter of the “new economy,” the San Francisco and San Jose areas, although these areas continue to attract people of millennials age. Housing prices may be playing a big role with roughly a third of Bay Area residents considering leaving, largely for this reason. Silicon Valley and San Francisco may remain great places to start, but are far from the easiest places to settle down for the long term.

Yet Silicon Valley is a veritable 35 to 49 magnet compared to most of the country’s big cities. Los Angeles, New York, Boston, Chicago and Philadelphia areas have all seen declines in their 35 to 49 shares both since 2000 and, more revealingly, since 2010 as well. In terms of 35-49s, these greatly hyped metropolitan areas actually do, however, much better than Rust Belt cities such as Detroit, Cleveland, Hartford, Pittsburgh and Rochester, which experienced a survey worst 9.5 percent decline relative to the national rate in Xers since 2010 and a 19.2 percent decline since the beginning of the new millennium.

In the popular press, youth (stretched liberally as high as 50) are widely associated with the much heralded “return to the city.” Yet in reality, all generations continue to head primarily for the suburbs, with this trend most evident among those aged 35-49.

Using the “city sector model” to analyze metropolitan areas by such factors as density, age of housing, transit use and housing forms, we have looked at where 35-49s have been moving over the past 11 to 15 years. Peope aged 35-49 have shown little inclination to stay in the urban core, moving out in considerable numbers to suburbs and exurbs.

Indeed since 2000 the percentage of Xers living in the urban core has dropped by one percentage point, while the percentage living in new suburbs and exurbs has grown by six percentage points. By 2015 over 80 percent of Xers in the 52 largest metropolitan areas lived in suburban areas, although they have in more recent years favored older suburbs (built before 1980) over exurbs.

This reflects one of the basic demographic realities: as people age, and start families, they tend to move further out. Generally speaking, notes economist Jed Kolko, the peak years for urban living take place between ages 18 and 30. After that there’s generally a steep decline as people start families and head to the suburbs. Kolko calculates that while almost a quarter of people under 30 live in urban neighborhoods, by age 40 the urban share drops well below 20 percent, and stays there well into their 70s.

The reasons for this move are not surprising. Suburban real estate tends to be cheaper than in good urban areas, and offers the kind of housing — single family — preferred by the vast majority of consumers. They also tend to be much safer (the rate of violent crime  in core municipalities remains almost four times higher), and have much better schools and less poverty than urban areas, things that tend to matter to people starting families and raising children.

What It Means For Other Generations

The increasing importance of Xers will, of course, impact other generations. Boomers, who have had a very long run in control of just about everything, are likely to see their influence reduced as Xers hit their prime earning years. This will be accelerated by the digital revolution; the average age of venture capital-backed founders, notes the Harvard Business Review, is in their late 30s and early 40s, which puts them deep in X territory. Just as boomers had to adjust to the work culture of the previous generations, the millennials will now have to fit their careers into patterns developed by their Xer overlords.

For the millennials, the experience of the Xers may also presage their future lifestyle choices. Like the Xers, millennials are beginning to move into the suburbs, contradicting all claims to the contrary. Like the Xers, they too are looking for more space, something not likely to lead them to the city. Similarly they are also increasingly moving to the same lower cost cities, largely in the Southeast and Intermountain West. Since 2010, the biggest gains in millennial share have been Orlando, Austin and San Antonio.

Ultimately, rather than focus on boomers, the millennials will need to figure out how Xers think — their independence and entrepreneurialism — since Xers will be both their bosses and their role models. Generation X may be relatively small, and largely unsung, but what it does, and where it moves, may do more to shape the country in the next decade than the more celebrated groups born before and after them.

Joel Kotkin is executive editor of NewGeography.com. He is the Roger Hobbs Distinguished Fellow in Urban Studies at Chapman University and executive director of the Houston-based Center for Opportunity Urbanism. His newest book, The Human City: Urbanism for the rest of us, was published in April by Agate. He is also author of The New Class Conflict, The City: A Global History, and The Next Hundred Million: America in 2050. He lives in Orange County, CA.

Wendell Cox is principal of Demographia, an international public policy and demographics firm. He is a Senior Fellow of the Center for Opportunity Urbanism (US), Senior Fellow for Housing Affordability and Municipal Policy for the Frontier Centre for Public Policy (Canada), and a member of the Board of Advisors of the Center for Demographics and Policy at Chapman University (California). He is co-author of the “Demographia International Housing Affordability Survey” and author of “Demographia World Urban Areas” and “War on the Dream: How Anti-Sprawl Policy Threatens the Quality of Life.” He was appointed to three terms on the Los Angeles County Transportation Commission, where he served with the leading city and county leadership as the only non-elected member. He served as a visiting professor at the Conservatoire National des Arts et Metiers, a national university in Paris.

Photo by Caleb Smith; Office of the Speaker of the House [Public domain], via Wikimedia Commons

How Post-Familialism Will Shape the New Asia
Scroll to top